The Reason Why Buhari Must Visit The Niger Delta Tomorrow 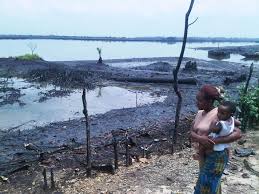 The area had heavily been polluted by oil spills thereby destroying the aquatic and human lives.

This information was on Monday released in a statement by the Chijioke Amu-Nnadi, Head of Corporate Affairs unit, Niger Delta Development Commission (NDDC) in Port Harcourt, Rivers State.

Environment Minister, Amina Mohammed, confirmed the date when she visited Bodo in Gokana Local Government Area of the state to inspect an oil spill clean-up demonstration.

“I can confirm that President Buhari will visit Ogoni land on June 2 to flag-off clean-up of oil spills in the area as recommended in the United Nations Environment Programme (UNEP) report.

“Buhari would return to Ogoni land where he inaugurated a fish pond in 1984 where the once flourishing pond regrettably had been destroyed by oil pollution.

“The Federal Government is coming back to restore the ecosystem to what it used to be and as such restore the peoples’ source of livelihood.

“We are not just committed to implementing the UNEP report but we are also going beyond that by taking steps to improve security, good governance and economy of the Niger Delta region.

“I can assure that the clean-up exercise is only the beginning, as Mr President is focused on restoring hope to people of the region,”

The Niger-Delta region had been in a volatile situation, a militant group which called itself the Niger Delta Avengers,(NDA) had staged several attacks in recent weeks against various oil and gas installations.

This development has drastically brought about a reduction in the nation’s oil export and gas supply to needed industries, thereby affecting supply of electricity in the country. Many of the oil companies have equally shut down operation at the moment.

Recently the Federal Government appointed some senior government officials to liaise with the militant groups in order to bring about a total ceasefire from these militias.