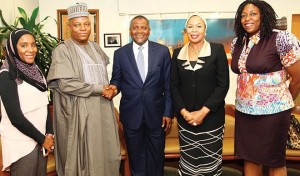 The President, Dangote Group, Alhaji Aliko Dangote on Tuesday hosted Borno Governor, Kashim Shettima in Lagos, with their discussion focusing on rehabilitation of internally displaced persons and reconstruction works in the areas of education and health care.
The Dangote Foundation, which is a charity wing funded by Dangote, was the platform of the two hours meeting held at the Dangote corporate headquarters in Falomo‎,Ikoyi, Lagos.

The meeting had in attendance the three Senators from Borno, Senate Majority Leader, Mohammed Ali Ndume, Senators Abubakar Kyari and Baba Kaka Bashir Garbai as well some members of the House of Representatives from Governor Shettima’s delegation while the side Dangote included Executive Director, Dangote Group, Halima Aliko Dangote; Chief Executive officer of the Dangote Foundation, Zouera Youssoufou and Mrs Erelu Angela Adebayo, a member of the Foundation’s Board.

During the meeting, Dangote’s team gave updates on delivery of food items for internally displaced persons in Borno during the Ramadan starting next, which is aims at fulfilling pledge made by Dangote when he visited Maiduguri three weeks ago. Trucks of food items are on their way to Borno, Dangote assured while making increases on number of trucks.
Dangote also said he was having another meeting with Governor Shettima to draw an action plan for specific interventions in reconstructions centered on schools and hospitals. The richest African also promised to attract some International support for Borno State.

Governor Shettima had earlier said his mission was to thank Dangote and members of his team for their generosity towards Borno especially recalling a figure of N2b donated by Dangote to Borno State during the Billionaire’s visit to Maiduguri.

“You are an extremely lucky creature of God, Sir, because it is one thing for one to have fortunes and it is entirely another thing for one’s fortunes to benefit his kinsmen, his country men and humanity.

“In our dear Kano, your State of origin, you have made and still making monumental impacts on the lives of our brothers and sisters in Kano. Here in Lagos you are doing the same thing and so it is across the country.
“For us in Borno, we are usually full of emotions whenever your name is mentioned. Only Allah knows the depth of our gratitude to you, no amount of words can describe what we think and make of you. ‎

“I want to start by first of all registering the eternal gratitude of the Government and all sons and daughters of Borno State for your empathy, for your love and for your unprecedented generosity.

“We are here to thank you and to pray that Allah increases you in health and wealth, bless your entire family and business empire.

“Sir, for you to have come to our aide meant you knew the challenges we faced and the ones ahead of us. It will amount to show of ingratitude for us to make any request from you. We want to use this opportunity to call on other wealthy Nigerians to emulate your spirit”, Shettima said at the opening of the meeting.