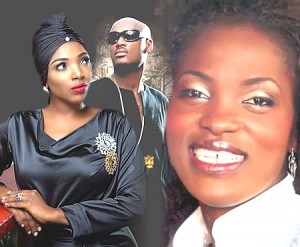 Trouble is looming in the Idibia family love web as Annie and Pero’s (2Face’s baby mama who has three kids for him) sister, Eniola both exchanged words over Tuface’s lack of access to  Pero’s kids.

Saturday Tribune gathered that trouble began when Annie started it all  by giving special praise to one of 2face’s other baby mamas, Sumbo Ajayi, describing  her as a ‘real mom’ in an Instagram post that was intended to speak against child abuse and celebrate parents who ‘don’t stress the other parent over seeing their own kid’.

She wrote: “I am all about child abuse for the last few weeks and I realise that they are so many forms of it, even as parents, we do this without us even knowing.”

Annie continued: “Let’s love our children more than the situations! Shout out to all the separated parents /EX who don’t stress the other parent over seeing their own kid! God bless you.. Your reward is bigger and it is in heaven…

This didn’t go down well with Pero’s elder sister, Eniola, who caught wind of the post and called out Annie for referring to her sister, Pero. Eniola then replied Annie asking her these questions: “Do you think we have deleted all your evil messages concerning those three kids? Do you want the world to know the truth on how you keep him from seeing his kids. Girl,  don’t even go there with me! I am not hiding. I am Pero’s only sister. The older one. This is a clap back season and I am so in on it. How dare you throw a subtle shade?! You think her keeping quiet means she is stupid, you think she doesn’t know how to use social media to aim fame? Living her life in the US quietly is because she respects her children, loves them and does not show them on social media to score cheap points and cheap likes. You think you can trespass that territory, You just crossed the line. If you think you are the superwoman, I got the krypton items for your ass she lashed #dontevengothere”.

But Annie insisted  that she never mentioned anyone in her post, while maintaining her posts was all about ‘child abuse’. “I didn’t mention anyone in my post, I ain’t throwing no shades, But you are so dumb that you haven’t been seeing all my post for past weeks about child abuse etc why does my post bother you so much? Ohhh someone is guilty of my post? And if you are who you say you are. Why are you even on my page? Teach your toddler self worth and self pride, don’t come on my page to rant your frustrations and stop acting clueless,”Annie fired back.

However, Pero’s sister who seems ready for war did not relent but responded saying “I have been waiting for you to respond and you have just killed yourself, you just ticked a time bomb. It is done, where is your hubby? You are dead! See you on the blogs..’she added

Previous N115b loot: Authentic List Of Those Who Refunded
Next You’re Not The National Leader of APC – Buhari Bluntly Tells Tinubu