My Relationship With Buhari Is Intact – Tinubu 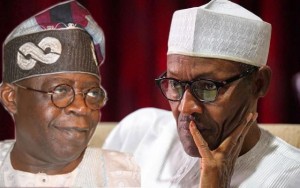 The National Leader of the All Progressives Congress, Asiwaju Bola Tinubu, has dismissed a rumour that he publicly condemned the policies and performance of President Muhammadu Buhari.

Tinubu said he had no rift with the President.

A statement issued on Tuesday by Tinubu’s spokesperson, Sunday Dare, said a comment alleged to have been made by Tinubu denouncing President Buhari’s policies and performance was far from the truth.

Dare said over the weekend,  more than 80 people called and emailed him about the purported comment.

“They were angry that some people would just manipulate and fabricate stories and go ahead to publish lies and absolute nonsense. All I could do was to calm them down. In the social media age, any knucklehead can publish or turn fact on its head. But we know this recent one is again coming from the stable of people who have sworn to destroy the relationship between President Buhari and Asiwaju Tinubu. Already, they have failed.

“The fact is this:  Sam Omatseye, who is the chairman, editorial board of The Nation, is a journalist of repute and a powerful and independent mind, who needs no prodding before he writes. He has been running a weekly Monday column since the paper’s inception and cannot and does not speak for Asiwaju Tinubu. His Monday 30th May column, titled ‘When the bell rings twice’ is entirely an analysis by him, penned and signed by him.”

Dare said the ongoing charade on the social media was to attribute falsely to Tinubu a piece he did not write, describing it as absolute nonsense.