Niger Delta Avengers blow up another oil well, says not negotiating with FG 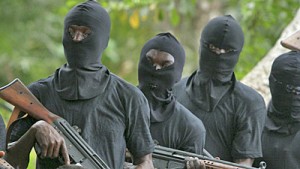 The Niger Delta Avengers on Wednesday claimed it had blown up another oil well.
The group equally said it was not negotiating with the Federal Government.
In two tweets on its Twitter handle in the early hours of Wednesday, the NDA said it blew up Well RMP 20 belonging to Chevron Oil.
It said in the first tweet: “At 1:00am today, the @NDAvengers blow up Well RMP 20 belonging to Chevron located 20 meters away from Dibi flow Stattion in Warri North LGA.”
The second tweet on negotiation with the Federal Government, said the group was not aware of any.
It said if anyone was negotiating with the Federal Government, it was not on behalf of the group.
It tweeted: “This is to the Gen. public we’re not negotiating with any Committee. if Fed Govt is discussing wth any group they’re doing that on their own.”