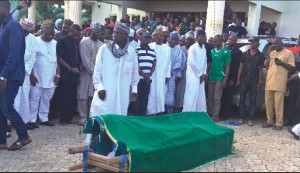 Beyond the ritual rumour surrounding the death  of Keshy and Amodu,,facts have emerged on how and why Amodu died…He has been ill for a while,financially down for non-payment of his salary..and the immediate cause -he fasted without ability to do so..Now experts are commenting …’People above 50 years and with a history of high blood pressure should only embark on fasting only with the concept of their doctors.This is pure negligence. How can a doctor certified someone that have pain directly in his heart okay to continue with fasting?

His death came just three days after another ex-national team coach and close friend of Amodu, Stephen Keshi, died in the same town.

Amodu’s corpse was deposited at the morgue of the Stella Obasanjo Hospital in Benin City, before he was buried on Saturday evening in his hometown Okpella, Etsako East Local Government Area, according to Muslim rites.

The former Super Eagles coach is survived by his wife, eight children, and an aged mother.

Amodu’s eldest son Abdul-Aziz said his father gave a hint of his death during their last conversation on Friday.

Abdul-Aziz, a 26-year-old graduate from Igbinedion University, Okada, said, “I am getting set for the National Youth Service Corps programme this month. So, I called him (Amodu) yesterday (Friday) to discuss with him but he didn’t pick my call. He called back and told me that he was very busy. He promised to come to Okpella today (Saturday), so that we could see.

“He briefly said something about death when I asked about (Stephen) Keshi. He said Keshi was not buried immediately because he was not a Muslim. He told me that if he died he would be buried immediately. Then today, I got the news that he was dead,”

Abdul-Aziz said he was shocked when he received the news of his father’s death.

“We were not even told that he was taken to a hospital. He doesn’t fast naturally. For the past few years, he stopped fasting due to his health condition. I don’t know what happened this year that he decided to fast. When I asked him about fasting, he said he just felt like he could do it,” Abdul-Aziz added.

Amodu’s cousin, Akuri Afegbua also said the former Eagles coach died after complaints of chest pain and his inability to get the money NFF owed him, adding that his financial status had made it difficult for him to take care of himself and his immediate family.

As the federation’s technical director, Amodu was reportedly on N800,000 per month but without an office and official accommodation.

Afegbua said Amodu had travelled to Benin to demand for the payment of his outstanding entitlements.

“I think he died of frustration due to his financial status. He was not paid (by the NFF). He was complaining of not being paid and had no money to maintain himself and his immediate family. I think the purpose of his being in Benin was to put in a bill for his payment, (from) both the NFF and the state government,” the cousin said.

“We were together on Friday. In the afternoon, he called to say that he was feeling some pains on the left side of his chest and he called in a doctor. The doctor checked his blood pressure; he had 140 over 100. The doctor told him it was not bad, that he could continue with his fasting,” Afegbua said.

He also noted that the ex-Eagles coach was full of life on Friday when he assisted one of his uncles to secure a bail at a police station. He added that it was shocking when they found Amodu dead at about 4am on Saturday.

“Apart from his complaint of chest pains, he was perfectly okay. We came back on Saturday morning to wake him up but found him dead,” Afegbua said.

South Africa-based Peterside, a football pundit and close friend of the late ex-Eagles coach, wrote on his tweeter handle that Amodu told him he was owed seven months’ pay by the NFF.

“NFF please pay the ones that are alive; got a call from him that he has not been paid for about seven months,” Peterside tweeted.

Meanwhile, the Nigeria Football Federation has said it would hold a joint executive committee meeting in honour of Keshi and Amodu.

The General Secretary of the NFF, Dr. Mohammed Sanusi, stated this when he led a delegation of the football body to the residence of the former Eagles coach in Okpella.

Sanusi said, “Definitely, it is going to be a joint meeting, since that (burial) of Keshi has not taken place. So, it is going to be a joint one. We are in a very sorrowful moment now. Nobody is in any mood to attend to anything; everybody is sad and down. But I believe by the time people start getting themselves back, we will call for a meeting and chat a way forward.

“These are heroes and we will do as much as possible to try to immortalise our heroes and their efforts will not be in vain.”