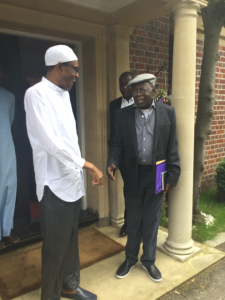 President Muhammadu Buhari on Thursday met Bola Tinbu, national leader of the All Progressives Congress (APC), in London, despite consistent rumours of a deteriorating relationship between the two.

The latest of such rumours began intensifying when Buhari made a last-minute cancellation of his official trip to Lagos but was then pictured on the day of the cancelled trip chatting heartily with Ibikunle Amosun, governor of Ogun state, at the presidential villa.

The cancellation was believed to be the result of the president’s displeasure with Tinubu’s meeting with labour leaders in the heat of their failed effort to mobilise workers against the federal government over the hike in fuel price.

However, both men were pictured together in London on Thursday, exchanging banters.

Buhari and Tinubu in London on Thursday

Earlier, on Monday, he met, the Archbishop of Canterbury Justin Weiby, at the Abuja House, London.

Welby it was who defended the president when UK Prime Minister David Cameron described Nigeria as “fantastically corrupt” in a private conversation with Queen Elizabeth in May, ahead of an anti-corruption summit.

Buhari’s 10-day vacation to the United Kingdom, during which he was expected to see his doctors for an ear disturbance, was originally scheduled to end on Thursday.