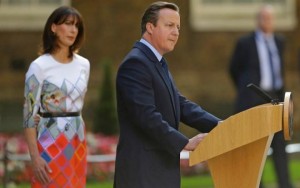 Mr. David Cameron is on his way out as Prime Minister of the United Kingdom after  the majority of British voted on Thursday  that their country should  leave the European Union (EU).

The PM had urged the country to vote Remain but was defeated by 52% to 48% despite London, Scotland and Northern Ireland backing staying in.

Speaking outside 10 Downing Street moments after the official result was released yesterday, an emotional  Cameron  said “fresh leadership” was needed.

“The British people have voted to leave the European Union and their will must be respected.The will of the British people is an instruction that must be delivered,” he said as he choked back tears .

He will step down in October.

Former Mayor of London and public face of Vote Leave,Boris Johnson is being touted as a likely successor.

He  began  to set out his vision for a revitalised, outward looking country in a speech just hours after his long-time rival tearfully declared that he would stand aside in the aftermath of the  referendum.

He said there was “no need for haste” about severing the UK’s ties.

He said voters had “searched in their hearts” and the UK now had a “glorious opportunity” to pass its own laws, set its own taxes and control its own borders.

Sources have revealed how the  teary-eyed PM told his inner-circle: “Why should I do all the hard s**t for someone else, just to hand it over to them on a plate?”

He made the extraordinary statement to his advisers, with wife Samantha present, before he spoke to the country about his decision to quit.

“It was the moment it really sunk in for all of us that it was over. He went out with dignity, and that was the most important thing for us.”

It’s believed he decided to quit before the vote was taken, reasoning if it was lost then there was “no way back” after such a rejection by the British public.