Saraki Says Buhari Govt Has Been Hijacked..Presidency Fires Back 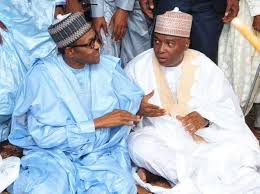 The President of the Senate, Bukola Saraki, on Monday, alleged that a powerful cabal within the President Muhammadu Buhari’s government had hijacked power from the retired general.

But the Presidency said Saraki’s claim was not only ridiculous but also preposterous since it was not backed by facts and detailed information. Saraki, in a statement signed by him in Abuja, however, reiterated his innocence in the charges preferred against him at the Code of Conduct Tribunal and at the FCT High Court.

ijacHe also vowed to use all legal means available to resist any attempt by forces within the Buhari’s government to persecute him for upholding his fundamental rights.

The Senate President expressed his willingness to go to jail instead of succumbing to the agenda of the cabal in the Buhari’s government.

He said, “What has become clear is that there is now a government within the government of President Buhari, who have seized the apparatus of executive powers to pursue their nefarious agenda.

“This latest onslaught on the legislature represents a clear and present danger to the democracy Nigerians fought hard to win and preserve.

“The suit filed on behalf of the Federal Government suggests that perhaps some forces in the Federal Republic have not fully embraced the fact that the Senate’s rules and procedures govern how the legislative body adjudicates and resolves its own disputes.

“Let it be abundantly clear, both as a citizen and as a foremost legislator, I will continue to rise above all the persecution and distraction that have been visited on me.

“Without doubt, the highest of those responsibilities is the steadfast refusal to surrender to the subversion of our democracy and the desecration of the Senate. This is a cross I am prepared to carry.

“If  (my not) yielding to the nefarious agenda of a few individuals, who are bent on undermining our democracy and destabilising the Federal Government to satisfy their selfish interests is the alternative to losing my personal freedom, let the doors of jails be thrown open and I shall be a happy guest.

“In the words of Martin Luther King Junior, ‘The ultimate measure of a man is not where he stands in moments of comfort and convenience but where he stands at a time of challenge and controversy’.”

In the Presidency’s reaction, the Special Adviser to the President on Media and Publicity, Mr. Femi Adesina, on Monday, said Saraki’s claim would have been more worthwhile if he had backed it up with more information.He said the President of the Senate would have taken the matter beyond the realm of fiction if he had proceeded to identify those who he claimed had constituted a government within the government. The presidential aide said without that proof, Saraki’s allegation was not worth the paper on which it was written as anybody could wake from a troubled sleep and say anything.

The statement read, “But as it stands, the allegation is not even worth the paper on which it was written, as anybody can wake from a troubled sleep and say anything.

The Attorney General of the Federation is the Chief Law Officer of the country.  It is within his constitutional powers to determine who has infringed upon the law and who has not.

“Pretending to carry an imaginary cross is mere obfuscation, if indeed, a criminal act has been committed.  But we leave the courts to judge.

“To claim that President Muhammadu Buhari is anybody’s stooge is not only ridiculous but also preposterous. It is not in the character of our President.”

Saraki insisted that the Senate leadership, being led by him, was innocent of the charges filed by the AGF, Mr. Abubakar Malami, at the FCT High Court on the allegations of forgery of the Senate Standing Rules document.

He said, “In our view, the charges filed by the Attorney General represent a violation of the principle of the Separation of Powers between the Executive Branch and the Legislative Branch as enshrined in our Constitution.

“Furthermore, it is farcical to allege that a criminal act occurred during Senate’s procedural actions and the mere suggestion demonstrates a desperate overreach by the office of the Attorney General.

“These trump-up charges are only another phase in the relentless persecution of the leadership of the Senate. This misguided action by the Attorney General begs the question, how does this promote the public interest and benefit the nation?”

He lamented that the current distractions were happening at a time when both the legislature and the executive arm of government should be working together to meet Nigeria’s many challenges.

Saraki said, “We are once again distracted by the Executive Branch’s inability to move beyond a leadership election among Senate peers.”

“It was not an election of Senate peers and Executive Branch participants. Over the past year, the Senate has worked to foster good relations with the Executive Branch.  It is in all of our collective interests to put aside divisions and get on with the nation’s business.”

Saraki expressed the fears that the current All Progressives Congress government in the country  risked alienating and losing the support of the very people who had trusted their national leaders to seek new and creative ways to promote a secure and prosperous Nigeria.

Meanwhile, the Deputy President of the Senate, Ike Ekweremadu, who was arraigned with Saraki on Monday for alleged forgery of the Senate Order, alleged that the leadership of the Senate were being prosecuted by senior officials of Buhari’s government based on mere rumour.

Ekweremadu, in a statement signed by him in Abuja, said that vindictiveness and arrogance should not find a place in the nation’s democracy.

He said, “It is deeply troubling to note that people in high places, who swore to uphold the law, have dwindled into purveyors of falsehood and rumour, who seek to smear and tarnish the reputation of law-abiding and responsible citizens as well as cripple the hallowed institutions of democracy.”

The DSP said he decided to present himself to the FCT High Court on Monday as an ordinary citizen to plead “not guilty” to charges he  did not commit.

He said, “It is all the more disheartening that people, who should know better, use the colour of their office to pursue private vendetta against people they disagree with.

“This grotesque display of vindictiveness, arrogance and mindless targeting of innocent citizens should find no sanctuary in our democracy.

“Using the machinery of justice to create disorder is a dangerous and an invidious scheme that ultimately will lead Nigeria down the road to perdition.

“It is Senator Bukola Saraki and Senator Ike Ekweremadu today. Who knows whose turn it will be next?”

Previous Shocking confession: I police in the day and rob at night
Next EFCC Closes In On FAYOSE,..Best Friend Arrested