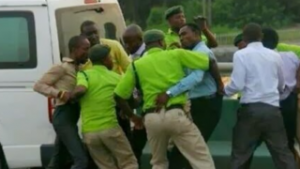 At the Maryland end of the Ikorodu Road, Lagos State,  some hoodlums, who were protesting the death of a hawker, vandalised no fewer than 15 vehicles.

The hawker, 22-year-old Nnamdi John, was crushed to death by a Nissan Pathfinder and a trailer while escaping from some officials of the Kick Against Indiscipline, the enforcement arm of the Lagos State Ministry of Environment.

The officials were said to be returning from the Ojuelegba area, where they had gone for a raid and had stopped over at Maryland to round up hawkers and roadside traders in the area.

It was alleged that the KAI officials pursued the victim across the road and he was hit in a bid to escape from the law enforcement agents.

The officials reportedly fled the area as the friends of the deceased and sympathisers blocked the road and went on the rampage.. some of the vandalised buses belonged to the LAGBUS Asset Management Limited.

A female motorist, Folasade Aliyu, who claimed to be a witness, said, “The hawkers sighted the KAI officials and began to run away. The victim was first hit by a sport-utility vehicle before a trailer crushed him.

“The KAI officials were there to arrest traders and hawkers on the highway. They were pursuing the boy when he was hit by the SUV.

Another witness, Ibironke Samuel, said the incident happened around 2pm, adding that the officers pushed the deceased to his death.

He said, “The KAI officers came in five vehicles. The vehicles were fully loaded with people they had arrested along the road.

“The boy had run across the road when the officers pursued him. When they caught up with him, they pushed him into the path of the SUV that killed him.”

Samuel said the KAI officials sped away in their vehicles after the Ebonyi State indigene had been crushed to death.

Subsequently, a mob was said to have blocked the road and started damaging vehicles owned by the government.

A witness, who did not identify himself, said some soldiers deployed to the area shot into the air to disperse the mob.

He added that the police later moved in to take the remains of the victim.

He said, “Some family members of the boy, who heard about the incident, also came. They met the police trying to take his corpse away, but they refused. They said they wanted to take the boy away for burial. The struggle for the body took a long time. Later, the police prevailed on the family and put the corpse at the back of their truck. His family members joined the police vehicle.”

During one of our correspondents’ visit to the scene, he saw a family member of the victim, Ukamaka Okoli, who said he started hawking goggles in January.

She said, “I just heard about what happened and that was why I rushed here. I was told the police had taken his corpse away. He just started selling goggles in Janaury. He lived with one of our brothers in Ikorodu.”

The Public Affairs Officer of KAI, Mrs. Ramat Alabi, said the officials were not in Maryland to arrest hawkers or traders along the road, adding that the hawkers ran for fear of being arrested.

She said, “Our officials did not go after the hawkers. KAI and LASTMA were at the Ojuelegba area earlier in the day for an operation. Our vans were returning and when we got to Anthony, the hawkers sighted us and began to run in different directions.

“This is usually their reaction whenever they suspect they could be arrested. It was in the process that the victim ran into the highway. One of the KAI buses was vandalised, but none of our officials was injured. It is not true that we made arrests in the area.”

The Public Relations Officer, LAGBUS, Mrs. Yemi Adesoye, said three vandalised buses had been brought into the company’s depot, adding that security agencies had restored order to the area.

She said, “So far, we can confirm that three of our buses were vandalised. We do not yet know whether there are more.

“According to our field operations manager, there are other buses managed by other companies.

“The government has deployed the Rapid Response Squad policemen to restore normalcy to the area. The three buses have been brought to our depot. In situations like this, there is no one to hold culpable for the damage on the buses as it was a mob attack.”

The Lagos State Police Public Relations Officer, Dolapo Badmos, said policemen from the Anthony Police Division and the RRS were in the area to douse the tension.

She said, “The command received a report that the operatives of KAI were at Maryland on duty. While this was on, one of the hawkers ran into the path of a vehicle and was killed. This sparked some controversies and unrest.

“Policemen from the Anthony division and the RRS were deployed to the area to restore order. Investigation is ongoing on the incident.”

Meanwhile, the Lagos State Government denied the report that the hawker was knocked down by a government vehicle.

The state Commissioner for Information and Strategy, Mr. Steve Ayorinde, said in a statement that contrary to the information on the social media, the street hawker was hit by a truck belonging to a soft drink company.

He said, “It wasn’t any of our buses that killed him (hawker); it was a soft drink company truck that unfortunately crushed the boy while he was trying to escape from KAI officers who were trying to rid the highway of hawkers and traders.

“But hoodlums took advantage of the situation to start destroying government assets, including several of the brand new BRT buses.”

Ayorinde said the corpse of the victim was taken to the morgue at the General Hospital, Ikeja.

The commissioner said at least three hoodlums alleged to had been part of the mob that destroyed the BRT buses have been arrested, saying that the law would take its course.
Adedeji Adeosun, a driver with the company, whose vehicle was vandalised said: “I was in traffic for about 20 minutes at Maryland.
“Then I saw some people running from Maryland and I opened the door to see what was happening.
“I heard shouts from people that we should come down.
“So, I immediately removed my uniform.
“I saw about 100 of the hoodlums, otherwise called area boys, coming with stones and so I ran away.
“All the passengers on board my bus also came down and ran for dear life.
I was hit by a big stone.”
Another driver, Michael Onabolu, said: “I saw people running and shouting that I should come down from the bus.
“And all of a sudden, I saw some guys surrounding the buses and asking my passengers and I to come down.
“Before I knew it, one of them hit the bus with a big stone and I could not move because of the traffic.
“I was wounded on my hands and my tights with stones.”
Onabolu said a passenger sitting beside him was also hit by a stone, adding that all the passengers were moved to other buses to reach their destinations.
A commuter, Elijah Omotayo, who was attacked in the process, said the mob told the driver to open the door, which the passengers asked him not to do.
Omotayo, a student, said: “They started throwing the stones and one of the stones hit my head.”
Fola Tinubu, the Managing Director of Primero Limited, expressed displeasure over the vandalism.
Tinubu said: “We don’t know what happened.
“Whatever it is, it is something that has to do with the government or the police.
“But does that give aggrieved people the right to destroy private property?
“People are saying that there are no jobs in Nigeria.
“We have created over 2,000 jobs in the last six months.
“Is this the reward we will get for it?
“We need to start asking ourselves serious questions in this country.
“They have destroyed over 14 of our buses now.
“I don’t even know how many they have destroyed now.
“For what?
“What did we do?
“I am angry.
“I don’t even know where to begin because there is no justification for destroying private property.
“Our service is for the masses.
“Do you know how many people will be stranded today if we don’t go out to pick them up?
“How are they going to get home?
“We do this for the masses.
“Is this the reward that we will get?
“This is madness.”
Meanwhile, the police, with the help of the bus drivers, have arrested three suspects and taken them to the company’s head office at Majidun in Ikorodu town.
As at the time of filing this report, the company has withdrawn its buses from the roads.
But the managing director said service would be restored when normalcy returns.