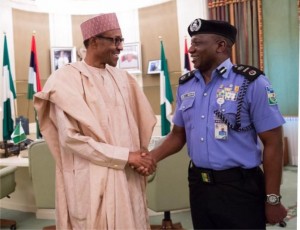 The appointment of an Acting Inspector General of Police,IGP,from the rank of Assistant Inspector General, AIG,has created another season of instability in the commanding heights of the Nigerian Police force.

If precedent is followed,the choice of MrIbrahim Kpotun Idris by President Muhammadu Buhari as the new IGP will compel the premature retirement of the six serving Deputy Inspector Generals, DIGs. They were appointed after the immediate past IGP Mr Solomon Arase assumed office April 21, 2015.

President Buhari settled for Mr Idris as the new police boss following an integrity test conducted on the top echelon of the Force. Before his appointment, he was in charge of Operations at the Force Headquarters until Tuesday last week. Idris was at different times Commissioner of Police in Nassarawa and Kano States.

Apart from his first degree in agriculture, he holds another bachelor‘s degree in law. He had also won a ‘Medal of Merit’ in international peace keeping operation. President Hari is empowered by the law to appoint any suitable senior police officer as Inspector General. He made the right choice given the background of Idris.

The Acting IGP is expected to bring his wealth of experience to bear in the policewhich has a crucial role to play in sustaining the nation’s democracy. Beyond this, the new dispensation in the police leadership has far reaching implications for the nation, the system and the career of the senior officers that would compulsorily retire.

The six DIGs who are the first set of casualties are barely a year in office. The nation invested so much in their training for optimal performance. This comes with experience which is invaluable. With their untimely exit, the Force will be denied a cream of crack officers who still have value to add to the system. They are leaving at a time they are bracing up to the challenges of their offices.

Nigeria is in dire need of a more effective police system that guarantees law enforcement, crime detection and prevention as well as respect for human rights. This feat can only be attained with tested hands who are not easy to come by. We bemoan a situation where top police officers who have something to offer are routinely retired, especially at this time when the nation is grappling with serious security challenges.

We recommend that the office of IGP should have a tenure. This will afford the nation an opportunity to get the best out of the Digs and AIGs. The Acting IGP has two and half years to retirement. The implication is predictable if his successor is picked from the lower ranks of those in line of succession . The nation cannot afford this costly waste any more.