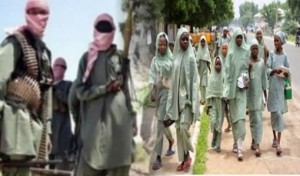 Six suspected Boko Haram members have been arrested in Lagos.
The members of the dreaded sect were arrested in a space of about four days.
They were arrested by local security operatives.
Their names were given as Ibrahim Ali, Abubakar Ahmed, Babagana Blam Ali, Goigoi Kamsalem, Ibrahim Mohammed and Adams.
They were arrested from three different locations in the state.
The Boko Haram members were said to have fled from Bama, Baga and Konduga Local Government Areas of Borno State following the increase in the tempo of military operations to flush out the dreaded sect members from the North East.
The Head of a group of local security outfit in Lagos, who is the Mai-Kanuribe of Lagos and Seriki Hausawa of Ijora Kingdom, Alhaji Mustapha Mohammed, disclosed these facts to journalists over the weekend.
Mohammed said five out of the suspects were arrested on Friday at Isheri-Ojudu Berger and Victoria Island areas, while the sixth was arrested in a church at Festac area of the state.
He said Ibrahim Ali and Babagana Blam Ali, who hail from Bama and Konduga Local Government Areas respectively, were arrested at Isheri-Ojodu Berger, while Goigoi Kamsalem, Ibrahim Mohammed, both from Bama Local Government Area, and Abubakar Ahmed of Baga Local Government Area were apprehended in their hideouts in Victoria Island.
Mohammed said the suspects are now on their way to Maiduguri, the Borno State capital, to be handed over to troops for further investigations.
He said his group is determined to protect Lagos from the carnage of the Boko Haram sect.
Mohammed, who hails from Borno State, said Lagos is home to many nationalities and as such must be protected by all, adding that he has invested and contributed to the development of the state since 1970 when he arrived the state.
The security expert disclosed that his group, with presence in all the local government areas in Lagos and Ogun States, commenced operation in Lagos since 2011.
He said the Boko Haram members would have succeeded in bombing some strategic installations and edifice in the state, but for their arrest.