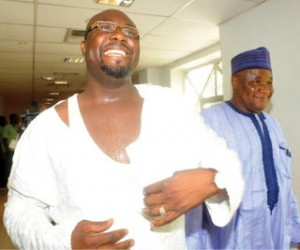 In the wake of his highly publicized verbal fight with Senator Remi Tinubu in the National Assembly, Dino Melaye shared this think piece, recalling alleged instances where Sen. Remi had confrontations with Senators and others. Read what he wrote after the cut..
WHY ALWAYS REMI TINUBU? : For the record, I want to give a few instances to buttress my perception of Senator Oluremi.
1. Just after she was first elected into the senate, one of the commissioners, who went to pay homage and congratulate her “mistakenly” referred to her as “distinguished senator”. She took everyone aback when she flared up and warned never to be addressed like that again, asking the commissioner: “What happened to Yeye? Do you know how many senators we have made? You probably should have called me by name. The man apologised and quietly left.
2. She held a town hall meeting in Yaba, sometime ago during her first term and when it was the question and answer session, Seun Okinbaloye of Channels asked a question, alluding to the fact that “we have heard of a few things about you and your husband and some of the things you have been doing in Lagos”. Senator Oluremi wouldn’t let him land, when she interrupted him and asked: “Who are you and where are you from? You heard a few things about us? We are Lagos”. Everyone was stunned and I was there.
Another lady from LTV 8 (can’t figure her name off the top of my head now) also stood up and asked her own question, starting with “distinguished senator”. She immediately pounced on her: “Imagine, she just called me senator when she was meant to call me mummy”. She also gave me mine. She mistook me for someone else from THISDAY and was going to attack me before someone else came to my rescue. However, I saved the day by going to the MC, Mr. Kehinde Bamigbetan (who was then Ejigbo LG chairman) to go and appeal to the journalists to take out the vexatious aspects of the interraction gone bad before the whole essence of the meeting is lost to her mannerism.
3. I know a former member of the National Assembly, who had to go to one of today’s cabinet members to report her, that the next time she was rude to him, he would damn the consequences and take her to the cleaners. I also know that Mark as former SP avoided her like a plague. Did anyone see how she charged at Senator Obanikoro when she objected to his nomination as minister? Instances abound and these are unbecoming incidences that should not be found in anyone’s character file. But that’s who she is. It will take a “real man” to brush aside such invectives and pretend an encounter ever took place with her. That’s where Dino missed it. But Remi can be such a menace.
Please note, I am not one given to cheap talks and these instances, I can verify to this platform. Thanks all.
Remi embarrassed her SP and the DSP
The same woman almost slapped Senator Rafiu Ibrahim and nobody demanded an apology /response from her or the entire Senate. Why now?
The same woman deliberately sat on the DSP’s seat to cause uproar yet, nobody demanded an apology from her. Why now?
Am just wondering why Tinubu supporters are now demanding a word from Senate after the same woman engaged Dino
Why always Remi Tinubu? Fatima Binta, Oduah & other mothers are yet to fight a man in the senate
Remi Tinubu Calling someone’s husband a thug/dog, I mean you can’t be of misconduct and hoping to become a role model for the next set of Generation
Hajiya Gambo, Sarah Jubril fought for women race without wrestling today, they are worthy to be looked up to
I repeat Fumilayo Kuti, Hajiya Gambo, Sarah Jubril fought for woman race without attacking any man – they are worthy to be looked up to.
Dino Melaye Reveals Remi As Arrogant slideshow Troublesome..Lists Instanses 2016-07-18
Younews Ng
Share