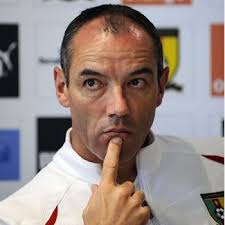 Newly-appointed Super Eagles coach, Paul Le Guen, has rejected the offer by the Nigeria Football Federation..He does not want to reside in Nigeria..and also does not want targets from his employer.
The Technical and Development Committee of the NFF had on Monday named Le Guen as the new Super Eagles head coach.
However, top French journalist, Herve Penot, revealed on his verified Twitter handle, @hpenot_lequipe, in French that the tactician will not go to Nigeria since his conditions were not met by the NFF.
Penot tweeted: “Paul le Guen will not go to Nigeria. Conditions not met to be coach. Nothing to do with the selection.”
After so much application for the top job, the Technical and Development Committee of the NFF on Monday named Le Guen as the new gaffer from a three-man-shortlist, which included Belgian tactician, Tom Saintfiet, and Nigeria’s Salisu Yusuf.
Recall that former coach of the Super Eagles, Sunday Oliseh, resigned his position, citing a breach of contract by Nigeria’s football body.
The former captain announced his resignation, citing unpaid salaries, lack of cooperation, among other factors as responsible for his action.
With the new development, Nigeria’s chances of qualifying for the 2018 Fifa World Cup in Russia may be at danger.

However,President of the Nigeria Football Federation Amaju Pinnick has denied that Frenchman, Paul Le Guen was ever offered the technical adviser of Super Eagles job as widely reported by the local media Tuesday. Speaking in the aftermath of the reported rejection of the supposed Super Eagles appointment by the former Indomitable Lions Coach yesterday, a livid Pinnick said the coach was only recommended for the job by the NFF Technical and Development Committee to the Executive Board for ratification, subject to an agreement on personal terms. “The NFF had never offered him the job.

Le Guen was only a recommendation of the Technical and Development Committee. The recommendation was subject to agreement of the NFF Executive Committee,” he said. He also disclosed the grey areas in the NFF conditions that may have caused the Frenchman to do a rethink on the job he once showed interest in.

Pinnick said, “Le Guen wanted to stay in France to be coming from time to time to take up the team on specific assignments. We are insisting on a Super Eagles coach that would reside in Nigeria. We want a coach that will be more embracing in terms of football development in Nigeria.” He also disclosed that the Frenchman was not happy with NFF’s targets for him. “He didn’t like targets. In the past we set targets for Siasia, for late Keshi and even Oliseh, why not him?” the NFF boss asked. He added that he believes targets motivate a coach to work hard. “We do not want to repeat the mistakes of the past where people were employed with so much expectations and they ended up disastrously.”