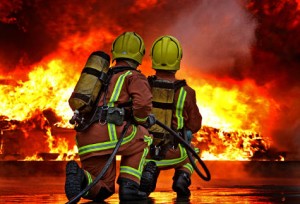 INEC had cancelled the election in the area on March 11 due to violence.

Although the cause of the fire is yet to be ascertained, it was, however, gathered that the inferno started in the wee hours of Friday.

Barely seven days to the July 30 rerun election in Rivers State, the office of the Independent National Electoral Commission, INEC, in Bori, headquarters of  Khana local Government Area and the ancestral headquarters of the Ogoni people has been set ablaze by unknown persons.

The area is key to the rerun election for Rivers East senatorial district scheduled for next Saturday.

Initial reports indicated that the fire started in the early hours of this morning.

An eyewitness said that “the office has been substantially damaged by the inferno and the whole building set ablaze.”

Kennedy Friday an Ogoni and a political activist also confirmed the inferno in his Facebook post.”I have just received news this morning that the INEC office in Bori is on fire. The whole building is set ablaze,” he said.

The Police spokesman said, “I have received the report but have details yet. I will provide more details when I get to the office.”

INEC had cancelled the first rerun election in the senatorial district on March 11  due to outbreak of violence violence.

The leading candidates for the senatorial district are Senators Magnus Abe of the All Progressives Congress (APC) and Olaka Nwogu of People Democratic Party, PDP.

INEC had insisted that it would only conduct the suspended rerun election  if the leaders and supporters the  political parties contesting the election were ready to eschew violence.

As at press time, no official statement has been issued regarding the incident
BREAKING: INEC office set ablaze 9 days to re-run election in Rivers slideshow 2016-07-22
Younews Ng
Share

Previous SOS.. deep and sincere cry for help!
Next Bode George Lists PDP Strategies To Reclaim Power from APC in 2019