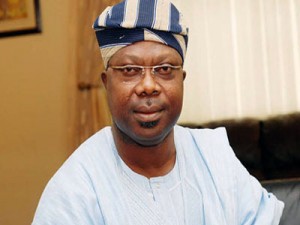 After all the denials and kicking,the former Deputy Governor of Osun State, Otunba Iyiola Omisore, has refunded to the Economic and Financial Crimes Commission (EFCC) N100million of the N1.310 billion public money  traced to him by the anti-graft agency.

He has subsequently been released by the EFCC from its custody to two members of the National Assembly who stood as sureties ahead of meeting his bail conditions.

He is expected return to the anti-graft agency tomorrow to perfect the bail conditions.

Highly placed EFCC sources said the deal to allow the ex-Deputy Governor  go home  since his arrest on July 10 was on account of his health and promise  to refund about N1.310billion allegedly allocated to him by the Office of the National Security Adviser(ONSA) during the Jonathan administration.

The EFCC source said: “The EFCC granted Omisore bail on compassionate ground to attend to his health. He was actually in the hospital where he underwent surgery.

“This is an anti-graft agency under a leadership committed to respect for human rights. After undergoing operation and following his pledge to refund the N1.3billion, the commission granted him bail.”

The money was traced to his account and three firms linked to him.

The source said: “Before Omisore was granted bail, he agreed to refund the N1.310billion and a repayment schedule was mutually consented to by the suspect and the EFCC.

“To demonstrate his commitment, he has returned the N100million to the commission. The cash is what was left in his frozen account.

“We are hopeful that he will keep to the schedule of payment of the balance of N1.2billion.”

The source said Omisore could not immediately meet his bail conditions but was released to two members of the National Assembly who stood as sureties for him.

“We have respect for him and these National Assembly members.  Based on this mutual trust, we granted bail to Omisore.

“The EFCC has asked him to return on Monday to fulfill other conditions for his bail including getting two directors in the public service with landed properties. We hope he will abide by his pledge.”

Omisore was arrested over N4.745 billion allegedly allocated to him and others by the Office of the National Security Adviser (ONSA).

Of this amount, about N1.310billion was traced to Omisore and three companies.

His accomplices include Governor Ayodele Fayose and ex-Minister of Defence, Mr. Musiliu Obanikoro, who has gone on self-exile in the United States.

A top EFCC source, who spoke in confidence, said: “Preliminary findings have shown that N1.310billion out of the N4.745billion from ONSA was remitted to the three firms and the accounts of these three companies belong to Omisore.”