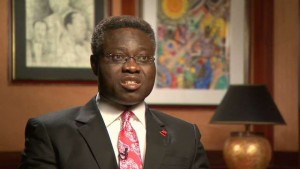 The outgoing Managing Director of United Bank of Africa(UBA), Phillip Oduoza said that the dearth of infrastructure has hindered most African economies from achieving their full potential.

Oduoza said this at the 4th valedictory lecture in his honour by the Chartered Institute of Bankers of Nigeria (CIBN) on Friday in Lagos with the topic, “The Emergency of A Nigerian Pan-African Bank”.

He noted that the challenge had led to the spillover effect on African companies’ profitability.

Oduoza said, “I realised that it was important to explore means of bridging this gap to a comfortable extent to ensure businesses run smoothly, remain profitable and contribute to the economy within which they operate .

“It is, however, pertinent to note that the current state of infrastructure represents an opportunity for a Pan African bank to provide project or infrastructure finance.”

He said that country was not exempted from the challenges which the governments had to reduce especially in terms of policy inconsistency.

“Similarly, to Nigeria, we have encountered frequent changes in policies, which often occur as the government and regulators of operating countries try to grapple with economic challenges.

“Resource commitments by banks to comply with new regulatory policies are not optimised due to frequent reversal of these policies. This makes doing business to be unduly costly,”he also said.

Oduoza said African market remained highly fragmented as tariffs, permits and licenses as well as other regulatory barriers increase transaction costs and limit the movement of goods and services.

The outgoing managing director said that trade within the sub-Sahara Africa represents about 10 to 12 per cent of its total trade, compared to its trade with China alone represented 27 per cent.

According to him, this shows the degree of which trade is limited within the region.

He attributed the development to the high informal nature of the economies of those African countries as well as the lack of appropriate platforms for cross border trade.

Oduoza urged central banks to collaborate to promote the development of cross- border trade platforms in order to encourage the informal sectors to join the banking system.

“I anticipate these figures to improve as the African economy continues to expand,” he said.

He noted that financial inclusion was necessary to ensure economic growth performance that would be inclusive and sustained.

He stressed that mobile technology had the potential to vastly expand financial inclusion across Africa saying that Pan-African banks with a good understanding of the continent could leverage their technology platform to capture the opportunity.

Oduoza said that would invariably mean a growth in retail banking as most of those financially excluded fall within the bracket.

He added, “UBA has effectively been promoting financial inclusion on continent by leveraging on our advanced digital banking platform.

“Working with our payment partners, we are improving the payment systems on the continent with prepaid and debit payment cards.

” We also make use mobile and internet banking platforms, which have been deployed and adapted for our subsidiaries across Africa.”

Oduoza took over as the Chief Executive Officer and Group Managing Director of UBA on Aug 1, 2010 and will serve his full two terms in office on Aug 1.

He is to be succeeded by Mr Kennedy Uzoka.