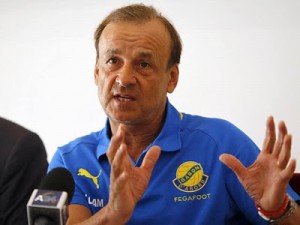 German coach,Gernot Rohr has been given a target of qualifying the Eagles for the 2018 FIFA World Cup finals in Russia..

In response to the challenge he has also described Nigeria as a country that is blessed with big players that has the ability to do well internationally. He said this moments after he signed a two-year contract to become the technical adviser of the Super Eagles.

The former coach of Niger Republic signed the dotted lines in a brief ceremony attended by the Nigeria Football Federation (NFF) President, Amaju Pinnick and General Secretary Mohammed Sanusi who signed on behalf of the  federation at the Transcorp Hilton Hotel yesterday.

After the signing ceremony,Rohr who has been given a target to qualify Nigeria for the Russia 2018 World Cup, explained that with the right atmosphere,the Eagles wil not only qualify  for the mundial but get to the latter stages of the competition.

“I am enthusiastic to get to work. This is a big challenge because Nigeria has big players everywhere and has the ability to do well internationally.

“I have a German heart – the heart of a winner. I have confidence that with the right atmosphere and the right support, the Super Eagles have the capacity not only to qualify for the FIFA World Cup, but get to the latter stages of the competition.”

Pinnick confirmed that the former coach of Niger Republic has been given a target of qualifying the Eagles for the 2018 FIFA World Cup finals in Russia.

“We are happy that this has been sealed and we can now focus on other arrangements for the 2018 FIFA World Cup qualifiers starting in October,” said Pinnick.

Rohr’s first assignment will be the 2017 Africa Cup of Nations qualifier between Nigeria and Tanzania in Port Harcourt on September 2.

Though the Eagles are already out of the AFCON,the match against the Taifa Stars will no doubt serve as an opportunity for the German to assess the team on ground ahead of the 2018 FIFA World Cup qualifier away to Zambia on October 3rd.

Nigeria will also battle Cameroon and Algeria in the Russia 2018 qualifier.