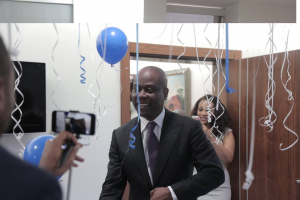 The Managing Director and Chief executive of foremost Nigerian bank, Access bank Plc Herbert Wigwe got a surprise birthday party from members of his staff Monday in a rousing ovation that at first was a surprise to the boss but then smiled at the love showered on him by his hardworking staff.

Herbert Wigwe, a  Harvard Business School Alumnus on Monday marked his 50th birthday in a rousing ovation from his beloved members of staff in Lagos amidst cheers and encomiums.

Mr Wigwe’s professional career spans accross 26  board members in 4different organizations across 5different industries in the last three decades, He spent over 10 years at Guaranty Trust Bank where he managed several portfolios including Financial institutions, Corporates and Multinationals. He left Guaranty Trust as an Executive Director to co-lead the transformation of Access Bank Plc in March 2002 as Deputy Managing Director. He was appointed  Group Managing Director/CEO effective January 1, 2014.

This business leader, whose deftness and ingenuity are legendary, does not like the spotlight. In his over a decade as the Group Deputy Managing Director of Access Bank, he tactically veiled himself from media attention as he continued to pilot series of revolutionary business initiatives that enhanced the bank’s industry positioning and boosted its fortunes.

Since assuming office on January 1, 2014, Wigwe has had to deal with the fact that our society celebrates achievers, and not only their accomplishments as he would have wanted, for him to remain ‘private’ while his leadership initiatives and contributions to the African continent continue to impact lives.