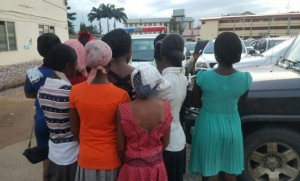 The Lagos state command is currently investigating the general overseer of ‘Tongue of Fire Restoration Ministry’ for a case of abduction, defilement and abortion. On 30/6/2016, the command received a report that the suspect, a pastor with a church situated on Jacob Taiwo Street Oshodi was harbouring some young girls and freely having unlawful canal knowledge of them.

36-year-old Chukwuemeka Nwocha, the General Overseer of Tongue of Fire Restoration Ministry located in Igbosere, Lagos, has been harbouring 13 underaged girls as sex slaves in a three-bedroomed harem.

Fair complexioned and soft-spoken,  Nwocha did not come across as someone capable of such crime. When he started to talk about what he did before journalists, he started by saying “By His Grace,” a statement that elicited a laugh of derision from all present.

According to Nwocha, it all started when the children in his church, who called him, “Daddy, daddy” told him they would like to visit him.

He said, “I only tried to help the girls.When the first girl came, she said she  did not have anywhere to go. I did not know her parents. I am a pastor and I felt pity for her. After spending three days, I told her she needed to go out and bring some of her relations so that they would know where she was. But she did not.

“Later, some parents in my church also said they would like to send their chidlren to live with  me. Some of them came to spend holidays after their exam.”

He insisted the parents knew they were  in his house. But after telling stories that  diverted attention from allegations that he raped the girls and had also forced some of them to do abortions, he paused and shook his head.

“I am a pastor, the devil only used the children against me. I did not rape them. I only slept with Sola (real name withheld). She is my girlfriend and we actually planned to marry.

When asked how old the girl he mentioned was, he said she was about to clock 17.

Asked again if the parents of the girls he claimed knew their whereabouts also knew he was sexually abusing them, he said yes.

The Commissioner of Police, Lagos State, Mr. Fatai Owoseni, had said that the pastor haboured the girls with the promise of paying their school fees, feeding them and buying gifts for them.

“While they were in his house, three of them became pregnant and he took them for abortions. He first denied all the allegations but like all criminals, he later confessed to raping them without using protection,” the CP said.

Our correspondent, spoke with one of the girls, who were also brought to the Lagos State Police Command.

The 13-year-old girl, who sobbed as she talked, explained that her parents indeed gave her permission to spend the holiday in the pastor’s house.

The girl said all the 13 of them in the pastor’s house lived in one room in his three-bedroomed flat.

“There is only one bed in the room. We  all sleep anyhow we could. One of us, who is older is the one who cooked in the house. I got there two weeks ago. My parents are his church members. I just felt it will be good if I spent part of the holiday in pastor’s house. My parents gave their permission before I went there.

“It was when I got to the house that I saw other girls. Few days after I got there, he called me and took me to his room and slept with me. He told me not to speak to anybody about what he did and that he would buy me clothes. I knew that he was sleeping with the other girls. I don’t know whether anyone of the other girls have had abortion.”

The girl confirmed that the pastor is married and that his wife is schooling and was never around, contrary to the claim of the pastor that he was single.

This was corroborated by another girl who said they all called the pastor’s wife   Mary and that she  came around to the house once in a while.

The CP has said Nwocha would be prosecuted along with whoever conspired with him to commit the crimes.