Change Begins With Me has no political, religious, ethnic coloration – Lai Mohammed 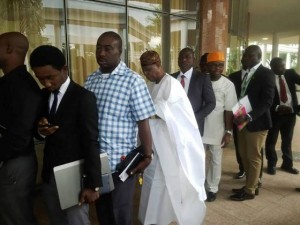 The Minister of Information and Culture, Alhaji Lai Mohammed, has said that the national reorientation campaign: “Change Begins With Me,” has no political, religious or ethnic coloration.
Mohammed made this known at the inauguration of the campaign by President Muhammadu Buhari, in Abuja on Thursday.
The minister, who presented the multimedia format of the campaign to the public, said it had “the sole objective of achieving a paradigm shift in the ways we do things.
“Change begins with me is a national campaign that has no coloration whatsoever.
“The campaign principle is simple, each one of us must live the change we want to see in our society.”
Mohammed solicited the support of the media, particularly the public and private-owned television and radio stations, by allotting airtime for the campaign clips.
He said: “The campaign will be carried out in all the major languages of the country.
“In propagating this campaign, we will also leverage heavily on the social media and it will be largely youth-driven.”
The News Agency of Nigeria (NAN) reports that the multimedia format presentations centre on acts and consequences of corruption, bribery, bunkering and other economic sabotage activities.
There were also presentations on moral values – punctuality, obedience to traffic rules, use of pedestrian bridges and consequences of examination malpractices, among others.
The high point of the ceremony was the presentation of a flag by the president to the minister signalling the commencement of the campaign across the country.
Present at the ceremony were, the Chief Justice of Nigeria, Justice Mahmoud Mohammed, governors, ministers head of government establishments, traditional rulers, religious-based leaders, members of diplomatic corps and students.
NAN.
Change Begins With Me has no political ethnic coloration – Lai Mohammed religious slideshow 2016-09-09
Younews Ng
Share