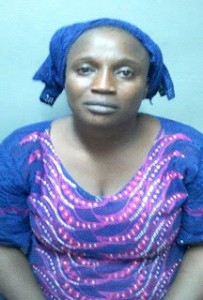 The Saudi-bound female pilgrim who was arrested last week by the National Drug Law Enforcement Agency (NDLEA) has excreted the final wraps of cocaine.

55-year-old Basira Iyabo from Kwara State was headed to Medina to perform the annual pilgrimage when she was arrested at the Nnamdi Azikiwe International Airport, Abuja, during the outward screening of passengers on an Emirates Airlines flight to Dubai.
She excreted seventy-six (76) pellets of cocaine and was then placed under observation until she expelled all the injested drugs totaling 82 wraps.  NDLEA spokesman, Mitchell Ofoyeju, who confirmed the report said the married mother of three excreted the last wraps of the substance over the weekend while in their custody. The total weight of drugs excreted by the suspect was 931 grams.
Muhammad Mustapha Abdallah, the anti-narcotics boss, described the action of the suspect as shameful and stated that the drug trafficker would be sanctioned in line with anti-narcotics laws.
“It is a shameful and discreditable act for a 55 years old mother who is going on a holy pilgrimage to ingest narcotics. This is very shocking and a clear indication of her inability to effectively discharge parental responsibilities. The agency shall invoke the powers of the law against her and others caught indulging in production or trafficking of drugs.”
Also commenting on the arrest, NDLEA Commander at the Abuja airport, Hamisu Lawan, said arrangements had been concluded for her prosecution in the law court. If the suspect had been caught in Saudi Arabia, she would have been publicly executed according to the law of the land.
In her confessional statement, the trader who sells cosmetics at Dosumu Market in Lagos owned up to the crime and also provided investigators with useful information. She said that she desired to expand her business in Dosunmu Market and her sponsors, who she declined to mention, offered her the sum of N1 million to courier the drug to Saudi Arabia.
“I am a trader in Lagos, married with three children. I wanted to expand my cosmetic business, but I have no money. My sponsor offered to foot my expenses to Saudi on pilgrimage. This was how I got involved in the act. I was excited until the issue of drugs was introduced. I wanted to decline, but it was late. Besides, I was offered one N1 million, which I accepted. I swallowed the drugs in Lagos and took a flight to Abuja on my way to Medina, but I was caught in the process”
Saudi-bound pilgrim drug trafficker arrested by NDLEA excretes final pellets of cocaine slideshow 2016-09-12
Younews Ng
Share