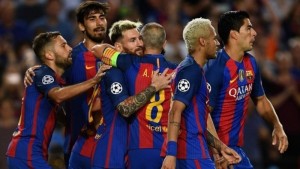 Bayern München  were  five-star as they  managed five goals against Rostov.

It was also a good night for Atletico Madrid and Napoli as they began with away wins at the group stage.

In Paris, Arsenal held Paris Saint-Germain, 1-1, with striker Olivier Giroud and PSG’s Marco Verratti being sent off in added time.

There are timely points too for Basel and Beşiktaş too.
Group A
Paris Saint-Germain 1-1 Arsenal
Edinson Cavani’s goal after 44 seconds, the quickest ever for Paris in the UEFA Champions League, was cancelled out with 12 minutes to go when Alexis Sánchez struck. David Ospina had done well to keep the hosts down to one.
Basel 1-1 Ludogorets Razgrad
Jonathan Cafú netted on the stroke of half-time but Ludogorets were denied a first-ever away victory in the UEFA Champions League group stage by Renato Steffen’s 80th-minute equaliser.
Group B
Dynamo Kyiv 1-2 Napoli
Arkadiusz Milik registered twice in the last nine minutes of the first half to ensure a valuable win for Napoli. Denys Garmash had given Dynamo the lead when set up by 18-year-old competition debutant Viktor Tsygankov, but they ended up with ten men with Serhiy Sydorchuk dismissed in the 68th minute.

Benfica 1-1 Beşiktaş
Franco Cervi’s fine run and shot in the 12th minute looked to have got Benfica off to a winning start but deep in added time on-loan Talisca, playing against his parent club, equalised with a free-kick.

Group C
Barca 7-0 Celtic
Not only did Lionel Messi claim his sixth UEFA Champions League hat-trick, Neymar score a free-kick along with providing four assists, Luis Suárez keep up his fine run in this competition for Barcelona with two goals, and Andrés Iniesta contribute a superb finish, but Marc-André ter Stegen also saved a Moussa Dembélé penalty for Celtic.

Group D
Bayern München 5-0 Rostov
Robert Lewandowski got Bayern off the mark with a 28th-minute penalty and Thomas Müller made it two just before half-time, before two Joshua Kimmich strikes and a late Juan Bernat effort made it a miserable debut for Rostov. It was a record 13th straight home win in the competition for Bayern.

Previous 10 Reasons Why You Should Stop Looking For Job As A Graduate
Next Jilted 19-year-old, most beautiful girl, commits suicide