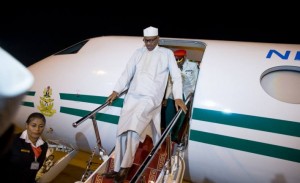 Despite the biting economic recession in the country, the Buhari-led administration have reportedly spent the sum of N5 billion on Presidential Air Fleet (Presidential jets) in the last 15 months, document obtained from the Presidency revealed.

According to the document, the Presidency put the amount of money so far released for the Presidential Jets since the inception of the current administration in May 2015 till date in the region of N5 billion.

The breakdown of the sum showed that N2.3 billion was released for PAF by the Office of the Accountant-General of the Federation between May and November 2015.

That figure included releases for personnel costs, overheads and capital expenditures; out of the N5.19 billion appropriated for PAF in the 2015 budget.

– Following the launch of the “Change begins with me” campaign, Nigerians call on Buhari to reduce cost of the governance – The presidency in a response said that Buhari established the committee to cut the number of presidential jets

Senior Special Adviser on Media and Publicity to President Muhammadu Buhari, Garba Shehu, has said the President has put in place a committee to reduce the number of aircraft on the Presidential fleet.

Shehu made the disclosure on his official twitter handle @GarShehu, while reacting to an inquiry on the state of Nigeria’s Presidential fleets.

Nigerians over the years have frowned at the Federal Government over the huge funds expended in maintaining the large number of aircraft in the Presidential fleet.

Honestly, Nigeria has become a country where you cannot have a decent conversation. It is difficult to share a view without being questioned as regards who you are for or against.

But my view on this issue has been made known long before now. If we are serious, we need to stop pretending. The Nigerian democratic and political class constitute an embarrassment in terms of the manner they use public resources in relation to the wellbeing of the masses.

Considering the state of the country, if I were the President, I would sell off the aircraft. People may think that is extreme but I don’t think it is.  There are countries which do not have a presidential jet not to talk of a fleet. Yet, the presidents of those countries still move around.

The mindset of many of those who have governed Nigeria is different. What do we need those aircraft for? I do not see their usefulness, not when there are serious challenges that need to be addressed. – • Pat Utomi (Professor of Political Economics)

Of course, there are countries that do not have presidential aircraft; their presidents use commercial airlines. But can we do that in the absence of a national carrier?

If we must keep presidential jets, we should decide on the maximum number we need. Perhaps, we could sell off the old ones we have and buy fewer but newer ones that would not be too expensive to maintain. I do not think the Presidency needs more than four aircraft; we can make do with a fewer number.

Those who are not in government may not know why the President keeps more than five aircraft. Maybe, they should explain the rationale to us. But they should consider selling off some of them and maintain a reasonable number. They should consider the state of the economy when deciding the number they want to keep.

If we must tighten our belts, it should start with the President. The issue of presidential jets is just one of the anomalies in the country. There is a car manufacturing company in the country called Innoson. How many of Innoson cars are in the President’s fleet? A government that wants to truly encourage local manufacturing would visit the plant and give the management the specifications of the cars it should supply the Presidency. If it does that, the company would expand its operation and employ more people. That would also encourage the growth of start-ups.

Some of these issues boil down to evolving a national socio-economic blueprint that is suitable. There are serious challenges in the country because the government does not provide the basic needs for the people. That is why people approach elections with a do-or-die attitude. People rig elections because they believe that is the only means to a life of comfort.

The country is designed in such a way that if you do not have access to power, you cannot survive. This is a fundamental issue the government must find a way to address. And you cannot address this when you are thinking of how to maintain a fleet of jets.- • Innih Achibong (Lawyer/Executive Director, Liberty Now)

With or without recession, it is not economically right for the country to keep 10 presidential aircraft. This is what I have noticed among all oil-producing countries – every one of them engages in extreme extravagance. And some of them would become failed states if they are not careful.

Today, public infrastructure is at zero level. Public education has collapsed. In most cases, you either patronise private schools or you take your children abroad. This should bother the government.

Interestingly, I don’t think the presidential fleet is the only wasteful area we need to tackle. What are we doing with the Senate? It is obvious that we cannot afford to sustain the bloated presidential system. So, the Senate needs to be scrapped.

The waste in the system is enormous and this is systemic. Chief Olusegun Obasanjo talks about this extensively in his book, My Watch. Our system is too expensive. We need to begin to reform the political structure. The best way to go about this is to drastically prune the number. To start with, the presidential fleet and foreign trips by elected public officials should be drastically reduced. — • Jubril Ogundimu (Human rights activist)

Considering the current challenges, can we continue to keep the number of aircraft in the presidential fleet? Honestly, we cannot. Those aircraft were acquired some years ago without recourse to proper cost analysis.

But the way the President is going about the management of the fleet is not certainly the right manner. We can no longer afford to keep the large fleet. How can the Federal Government’s fleet be the second largest in the country?  Consider the example of the United Kingdom; the British Prime Minister flies the British Airways.

We need to reduce the fleet in view of the current economic reality.

It is obvious that we cannot continue to keep the number of aircraft. The money we use to maintain them can go into other areas. We need to reduce the cost of governance.

Transportation, housing, power and several other areas have challenges that need to be addressed. Buhari needs to change his attitude.- • Norrison Quakers (A senior Advocate of Nigeria)

President Muhammadu Buhari rode to power on the heels of credibility, incorruptibility and managerial capacity. But some of the things we have seen in the past 15 months are contradictory to such virtues.

Maintaining a fleet of presidential aircraft with billions of naira during an economic recession is not only corrupt, but also unjust, insensitive and unfair to poverty-stricken Nigerians. Nigerians are not poor because they are lazy. Poverty is inflicted on them by a succession of corrupt, inept and unpatriotic leaderships.

The Presidency must learn to operate within the realities of our economic challenges by significantly reducing wasteful spending. A government that owes workers salaries and is saddled with huge debts should not be seen to be living. It is criminal to ask Nigerians to tighten their belts while politicians are increasing their insatiable appetites.

It is an anti-climax to the anti-corruption credentials of Buhari that people who are alleged to have corruptly enriched themselves – including a service chief who is said to have a multi-billion naira property in Dubai  – have not been investigated.

They still retain their positions while the government has continued to go after those in the opposition party.

President Buhari’s so-called anti-corruption fight has been tainted by its selective nature. He has considerably lost his credibility in that respect.- • Mark Adebayo (Executive Secretary, Coalition of Nigerian Rights Activists)

A president that means well for the people and knows what he is doing does not need more than two aircraft. After all, there are countries that do not even have one. What is the President doing with 10 aircraft?

The President should sell off some of the aircraft and keep at most four. Besides, he and his team should only use the aircraft when it is necessary. That would reduce the cost of maintenance. We certainly do not need the number of aircraft the Presidency is keeping presently.

There are serious challenges in the economy. The Federal Government should understand that the country cannot continue to waste public resources on things that we can do without. – • Aaron Jacob (Coordinator, Sustainable Development Network)

The current recession calls for a general downsizing. I do not think keeping 10 aircraft speaks well of a country that has no national carrier.   We are in a period of rethinking; every public spending should be done with caution.

Ethiopia has a thriving economy built partly on huge profits from its airline; the same thing applies to Kenya.  But we do not have such plans here.  We want the government to demonstrate a symbolic action by reducing the cost of governance.- •Dr. Abiola Akiyode-Afolabi (Founding Director, Women Advocates Research and Documentation)