The controversial Ondo State politician, Jimoh Ibrahim, said on Saturday that he remained the governorship candidate of the Peoples Democratic Party, PDP, in the state, even as he campaigned for the APC candidate.

Mr. Ibrahim urged Ondo residents to vote en-masse for Rotimi Akeredolu, who is currently locked in a keenly-contested three-way race with Eyitayo Jegede and Olusola Oke.

Mr. Jegede was confirmed as the authentic bearer of the PDP’s campaign flag in the state earlier this week by both the Appeal Court and the Supreme Court, following weeks of intense political and legal faceoff with Mr. Ibrahim.

Speaking with reporters shortly after casting his ballot, presumably for Mr. Akeredolu, on Saturday, Mr. Ibrahim said he was unaware of his defeat at the court.

“There is nowhere the court gave any order that my name should be removed, so I remain the candidate,” Mr. Ibrahim said after voting at his unit in Igbotako in Irele Local Government Area.

Mr. Ibrahim aligns with the Ali Sheriff faction of the PDP while Mr. Jegede is of the Ahmed Makarfi-led faction.

Earlier in a press statement on Saturday, Mr. Ibrahim said voters should give their mandate to the APC.

“Having considered all the candidates asking for the job of Governor of Ondo State, I have come to the conclusion that only Oluwarotimi Akeredolu (SAN) of the APC possess (sic) the right mentality, competence, readiness and moral amplitude to lead Ondo State.

“I am therefore directing all our PDP party leaders, ward evangelists and unit canvassers, supporters as well as all the non-politician society leaders who are working with us, including Kabiyesis, civil servants, workers union, religious leaders to work hard for and mobilise votes for our brother and friend Oluwarotimi Akeredolu (SAN) of APC,” he said.

Mr. Jegede and his faction of the PDP had accused Mr. Ibrahim of being an agent of the APC who is meant to destabilise their party’s campaign.

Businessman Jimoh Ibrahim had taken to his twitter handle to launch a surprise campaign for the All Progressives Congress and its candidate, Rotimi Akeredolu.

Mr. Ibrahim’s support comes a day after the Supreme Court threw out his appeal against the judgement sacking him as candidate of the Peoples Democratic Party. 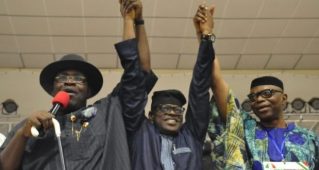 Mr. Ibrahim’s post confirms the allegations that he and his co-travellers in the Ali Sheriff faction of the party were out purposely to destroy the party and ensure it did not win the governorship election.

“The people of Ondo have no choice than to Love Akeredolu,” hew wrote on Friday on his handle @JimohIbrahimOFR.

“I know him as a selfless politician with peerless leadership.

“I can see #OndoLoveAkeredolu everywhere. Why won’t the people of Ondo Love Aketi? He’s a consistent politician with first class integrity.”

But Mr. Jegede, who is weakened by the 30-day legal battle, appeared to have been dealt a blow since he had no time to put his campaign back into full swinJimoh Ibrahim was the candidate of the state’s ruling PDP in the election until Wednesday when the Appeal Court dismissed his claims to the party’s governorship ticked.