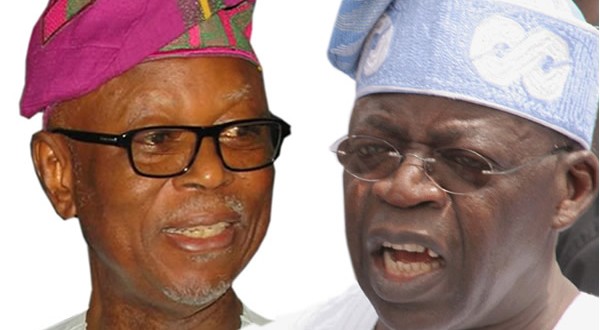 The National Chairman of the All Progressives Congress, Chief John Odigie-Oyegun, has replied the letter written to him by the national leader of the party, Asiwaju Bola Tinubu.
Odigie-Oyegun’s acknowledgement came after he held a closed-door meeting with President Muhammadu Buhari at the Presidential Villa, Abuja, on Friday.
This came 48 hours after Tinubu wrote the party chairman, accusing him of undermining his efforts aimed at reconciling aggrieved party members, as directed by President Muhammadu Buhari. But in his reply, Odigie-Oyegun merely expressed gratitude to Tinubu for wishing him well, saying Tinubu should rest assured of his support towards ensuring the success of the task given to him by the President.

A copy of Odigie-Oyegun’s acknowledgement letter dated February 23, 2018, read, “I thank you for your letter dated February 21, 2018, for your prayers and good wishes for my health. I wish you the same and pray that our good God keeps you strong and grants you His peace. Let me once again formally congratulate you on the peace-making assignment Mr. President has entrusted you with.

“It is most challenging but I believe you will ultimately justify the confidence reposed in you by Mr. President. In this, you have my full support. Be assured, dear Asiwaju, of my highest regards now and always.”

Tinubu had in his letter accused the party chairman of undermining his assignment. He accused the APC National Chairman of positioning himself in active opposition to the goal of resuscitating the progressive and democratic nature of the APC.

Although details of the party chairman’s meeting with the President on Friday were sketchy as of the time of filing this report, it was gathered that the President prevailed on the National Chairman to cooperate with the former Lagos State governor.

Odigie-Oyegun arrived the Presidential Villa at about 3 pm and left at about 3.50pm. Apparently aware that State House correspondents would seek to hear from him over the letter, the party chairman avoided them.

As soon as he sighted the journalists who were waiting for him at their operational base inside the Council Chambers Briefing Room, Odigie-Oyegun increased his pace as he found his way out of the premises.