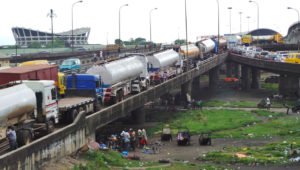 A 48 hours deadline has been issued to truck drivers  to clear off Lagos bridges.

The military and the State Government issued the ultimatum  during a stakeholders meeting  at the Apapa Headquarters of the Western Naval Command (WNC).

Rear Admiral Abbah said the  trucks’ presence on the bridges constituted a security risk, adding that they could be easy targets for terrorists.

The FOC warned that the bridges could collapse because of the static weight they had been forced to carry for over a decade.

He lamented the  manhour and resources the navy wasted whenever it  moved personnel for ground operations from Navy Town, Ojo to  Apapa Base.

Abbah said: “We cannot continue like this. This gridlock from Apapa to Mile Two and then from the stadium up to Eko Bridge does not do anyone good.

“We are going through  trying times in the country and the mere presence of these tankers and trucks on our bridges constitute easy targets for terrorists. No one knows where and when terrorists strike from. Their actions cannot be predicted and that is the more reason why we cannot continue to have these vehicles parked on the bridges for two to three weeks.

The navy deployed its helicopters on Monday to take aerial footages of the situation and I can tell you it is very worrisome. So many people have lost their lives as a result of this traffic. These bridges were constructed in the early the 1970s to carry moving weights not for static vehicles. The bridges have since carried more than the weight they were built for. Parking trucks on them could lead to collapse because they weaken the bridges.

“We have heard from NUPENG and I use this opportunity to appeal to the leaders here to call their men to order. We do not want to see tankers and trucks parked on the bridges anymore. They have requested for 48 hours to start phasing off their trucks from the bridges and we have obliged.”

Salau said part of the problem was that Apapa Port was overstretched.

The PS said the government had completed a holding bay that could accommodate 3,500 tankers at Orile, adding that work is ongoing on another one that can take 2,700 containerised trucks.

Salau said: “The bridges were built to carry light load and not heavy weights as they have been subjected to. I am afraid that no bridge in Lagos can stand integrity test.

“I have not seen anywhere in the world, where a port that discharges goods of this capacity does not have rails to move them to loading bays of shipping companies.

“Another problem is that shipping companies do not have loading bays. After discharging their goods, these containers are supposed to return to the bays. But go to the port and see the quantum of containers there, you will realise that they have turned the port to their loading bays.

“The NPA is also part of the problem. When they take a step forward, they take two backward. There is also the issue of tank farms. This traffic situation is a national calamity. Lagos State is staking all to solve it because it is not only Apapa that is affected. The vehicles have entered inner routes and virtually all parts of the state suffer from their action.”