Until 2015, Tony Anenih could fix anything in politics, but the former chairman of the PDP board of trustees was on Sunday outsmarted by death at a ripe age of 85. For a man who played lead roles in installing Nigerian presidents from 1999 to 2011, he definitely earned his stripes as Nigeria’s foremost political strategist.

From the moment he joined politics in early 1980, Anenih remained a trailblazer and left his marks. He is surely going to be remembered for many feats, but one quality stands out: delivering results whenever he was needed by his party. His only record of failure at the national level was in 2015 when President Muhammadu Buhari swept the PDP out of power.

Born on August 4, 1933, Anenih finished his secondary school education and enrolled at Police College, Ikeja, from where he was selected for further training in the Bramshill Police College in England and later passed through  International Police Academy, Washington DC in 1970.

From the time he finished in the academy, he rose through the ranks at various points, working at some point as a police orderly to Nnamdi Azikiwe, first governor-general of Nigeria, and as an instructor at the Administrative Staff College (ASCON), Lagos.

He retired from the force as a commissioner of police after which he joined politics, emerging the state chairman of the National Party of Nigeria (NPN), a position he held sway between between 1981 and 1983.

Anenih was credited with masterminding the defeat of the Ambrose Alli, governor of the now defunct Bendel state, in the 1983 governorship election. Alli, candidate of Obafemi Awolowo’s Unity Party of Nigeria (UPN), was defeated Samuel Ogbemudia, a retired brigadier.

DID HE BETRAY ABIOLA?

Anenih, an ally of Shehu Musa Yar’Adua, was the national chairman of the Social Democratic Party (SDP) from 1992 and 1993, leading the party to victory in the 1993 presidential election acclaimed to have been won by MKO Abiola.

As an ally of Yar’Adua and Atiku Abubakar, he fell out with Abiola when the election was annulled. Abiola was accused of failing to fulfill his promise of picking Atiku as his running mate. Abiola had won the first round of the ballot for the party’s presidential ticket, but he did not score enough votes to be declared winner. Babagana Kingibe came second while Atiku placed third.

In the run-off, Atiku asked his delegates to vote for Abiola under a deal that would have seen Atiku picked as running mate, but Abiola picked Kingibe instead. This offended the Atiku camp, which went on to produce Anenih as the chairman of the party after the presidential primary.

When the June 12 election was annulled, Anenih was accused of not fighting for the validation. Instead, he led the party executive to negotiate for an interim national government put together by the military regime of Ibrahim Babangida. That effectively killed June 12. 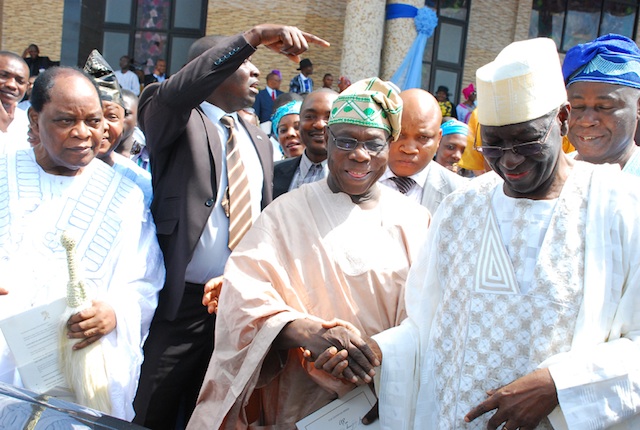 He and Obasanjo were buddies until 2007

In 1999, when Nigeria returned to democracy, Anenih was appointed minister of works and housing under the administration of former President Olusegun Obasanjo, which he had helped install. His relationship with Atiku began to deteriorate as a result of power struggles in the presidential villa. Anenih always aligned with whoever was in power.

He was instrumental to the election of President Umaru Musa Yar’Adua in 2007, after which he began to fall out with Obasanjo. He  later emerged as the chairman of the board of trustees of the PDP where he held sway mostly under former President Goodluck Jonathan. Obasanjo had resigned the position when he saw the signals coming — that Anenih was after his job.

TheCable understands that he and Obasanjo never reconciled until his death.

Anenih’s style of noiseless but strategic politicking earned him the name ‘Mr. Fix It’ and endeared him to many, with nothing but results usually in the end. But he had reservations for such name. He was also called “leader” — a title that meant virtually everything in the polity as people kowtowed to him.

For him, there was more to ‘Mr. Fix’ as a name than just admiration. In fact, he had rejected the name, choosing instead to be addressed as an achiever.

In his book My Life and Nigerian Politics’, Anenih wrote: “I am aware that some people call me ‘Mr Fix It’. I think such people call me that name, either in contempt or in admiration. It is possible that they are being mischievous. A few questions arise here. Am I ‘Mr Fix It’ as a reformer or someone who always does things right? Am I being held out as someone who by hook or by crook achieves results with the belief that the end justifies the means?

“In any case, I do not enjoy this appellation. I have always believed in what I do and I always make sure I achieve success without listening to the crowd of voices. If I am called an achiever, that sounds more complimentary, satisfying and positive than the ambiguous impression which ‘Mr Fix It’ connotes.”

LOST SON A MONTH AFTER WIFE PASSED AWAY

Anenih never had it easy in the last few months. The late PDP chieftain had learnt of the death of Eugene, his son, while he was still mourning his lost wife.

Patricia, his second wife, had died on April 15, 2018, only for his son to pass away barely a month after. In fact, plans were still in place for the wife’s burial when Eugene died. It was double tragedy.

Attaining 85 isn’t such a rare age and though such feat usually comes with pomp, Anenih never celebrated when he clocked so in July.

The Iyasele of Esanland had said apart from recently losing his wife and son, he wasn’t going to celebrate while people are being killed across the country.

According to him, “There is no doubt that attaining a milestone of 85 years on earth is a privilege enjoyed by a few; and, it is, therefore, an occasion worth celebrating with loved ones and friends.

“Whilst I remain grateful to God, for His unfailing love and sustenance that have kept me all through the years, I am, sadly, unable to fulfill this earnest desire to celebrate the milestone because of the unfortunate recent losses that befell my family in quick succession, the condition of my health and the sad state of the nation that has witnessed so much losses, bloodshed and apprehension.”

‘OBASANJO ASKED ME TO TAKE HIM TO ASO ROCK’

In his book, ‘My Life and Nigerian Politics’, Anenih told of how ex-President Olusegun Obasanjo had approached him and sought his help to become president.

He wrote that in the build up of the 1999 elections, Obasanjo had phoned him as one of the leaders of the People’s Democratic Movement (PDM) and presented him with two requests: “The first is that you should take me to Aso Rock. How you do it, is not my business. The second one is if we win, you must be a part of my government’. I was dumbfounded. Here was a former head of state making this passionate appeal to me.

He added that he had subsequently invited the top hundred (100) politicians in the country to a dinner at Nicon Hotel, Abuja, from where he started campaigning for Obasanjo.

Anenih served as the deputy national coordinator of Obasanjo’s campaign organisation during the 1999 and 2003 elections.

The late statesman had undergone a major heart surgery in 2015, and survived against all odds. He had told of how he slept for 22 hours after the surgery conducted at a UK hospital, with the doctors admitting such miracle never happened in the hospital.

Speaking of his experience at a thanksgiving service, Anenih had said: “Before the operation, the seven doctors told the people that accompanied me that I won’t make it loudly to my hearing. Then I said to myself, if I am not going to make it, then it is better I go to my flat and board any available flight to my home. But on a second thought, I said to myself, God brought me here to remove something in my eyes.

“When they finished (the surgery) … they sent me to intensive care unit where I slept for 22 hours without waking up. The chief medical director was waiting for the bad news of possible death, but after 22 hours, I woke up.

“One of the nurse told the doctor that the man had woken and his response was stop it! He came to my bed and asked if I am fine and responded yes. He said, ‘Chief we have finished the surgery 23 hours ago.’ He also told me that the hospital is 150 years old and this is the first miracle God has performed.”

If one could fix it, cheating death a second time would have been the wish of many of his proteges and admirers.