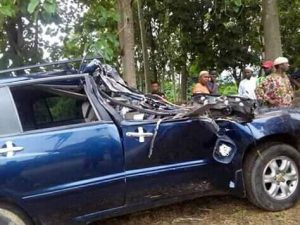 It came as a rude shock , because of the nayure of his death…many are already expressing deep sorrow over the death of Hon. Edward Keshinro, popularly called Keisha, who passed on to the great beyond Monday evening in a ghastly motor accident on Ilesa expressway.

Prince Diran Odeyemi, Deputy National Publicity Secretary, Peoples Democratic Party, from the same Ife/Ijesha federal constituency has conveyed the condolence messages of the National Chairman of PDP, Prince Uche Secondus and the entire National Working Committee to the people of Oriade ..he said “it was so sad that the exit of Kesh is a sad on.”

Odeyemi who extolled the virtues of Hon. Kesh said, Kesh was a fine politician whose experience expands well beyond his locality, having served his people in different capacities from Ilesa West, as Council Chairman, Secretary and at committee levels and in various capacities at both the local government and state levels.”

Odeyemi said Hon. Keshinro is a bridge builder who interfaces between the young and old breed politicians is unbiased by always ensuring that issues are resolved amicably every time rather than leading to dispute.

Prince Odeyemi also condoles with all leaders of PDP in Osun State, Obokun/Oriade and his immediate family and prayed that God will comfort them and give them the fortitude to bear the irreparable loss.

YOUNEWS recalled that he escaped political assassination by whiskers years back..

When no fewer than 50 supporters of Peoples Democratic Party (PDP) from Ilesa West Local Government of Osun State, sustained gun shot injuries in an aborted assassination of three prominent PDP leaders in the area.

Now he is gone in an accident.

Previous Awujale gets praises for talking about life after death
Next Shocking revelations from Taraba killings panel..Police works for kidnappers