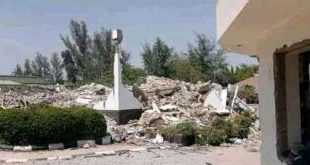 She struggled to survive, but eventually died on Monday, February 17, 2020 in Calabar, Cross River State, following a battle with stroke and weight.

She was said to have relocated to Calabar with hope that her daughter would take adequate care of her, unfortunately, the latter was also ill at the same time.

Chairman Actors Guild of Nigeria, Emeka Rollas confirmed her death on Wednesday in a statement.

“With deep sense of sorrow but with total submission to the will of Almighty God, we announce the passing unto eternal glory of Patience Oseni, veteran Actress and member of the Actors Guild of Nigeria,” his statement read.

Madam Oseni will be eternally remembered for playing the role of a female with a jumbo male organ in Helen Ukpabio’s hit movie, End of the Wicked.

Her other movies are My Only Love, Orange Girl and Bumper to Bumper

Previous 63 Under Surveillance In Lagos Over Lassa Fever, 103 die in Nigeria in 2 mths
Next Amosun claims he is behind $250m World Bank loan, Abiodun kicks