As a no nonsense Ogoni woman, l slapped Akpabio while trying to pin me down  for sex  – Ex-NDDC boss

Sanwo Olu’s Press Sec. reveals how he defeated COVID-19, back on the beat

“Why did he not tell Mr. President that I slapped him at his guest house?”

“I slapped Godswill Akpabio because he sexually harrased me”

“His girlfriend is major supplier of diesel to NDDC” 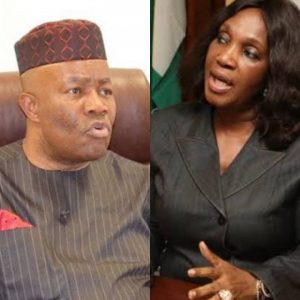 A new can of worms has been opened in the ongoing exchange of words between Joy Nunieh, former acting managing director of the Niger Delta Development Commission (NDDC), and Senator Godswill Akpabio, minister of Niger Delta affairs.

Nunieh on Monday said she once slapped Senator Akpabio for sexually harassing her.

She disclosed during an interview on Arise TV that the incident happened at the minister’s guest house in Abuja.

“Why did he not tell Nigerians that I slapped him in his guest house at Apo? I am the only woman that slapped Akpabio. He thought he could come up on me. He tried to harass me sexually,” she said.

“I slapped him. He tried to come on me. I am an Ogoni woman and nobody jokes with us. I showed Akpabio that Rivers women do not tolerate nonsense.”

It will be recalled that the Minister and the ex-NDDC boss have been publicly exchanging words over what transpired in the NDDC during her tenure.

This follows the activities of the senate ad hoc panel investigating the alleged mismanagement of N40 billion by the interim management committee (IMC) of the NDDC which Akpabio has already denied, claiming the NDDC under Nuieh’s leadership failed to give him necessary briefings.

He also accused Nunieh of having a bad character.

Nunieh, however, claimed she was forcefully removed from office because she refused to take “an oath of secrecy” which was meant to keep her from exposing fraud at the commission.

“How do you tell me to put some of their projects in the NDDC budget when we have so many things to do in the Niger Delta? How do you explain that?” she said.

Nunieh further claimed that Akpabio had threatened to sack her if she didn’t do what he wants.

“When we first came to the NDDC, on the day of going for the inauguration, he told me in the car that Madam MD, If you don’t do what I say, the same pen which I use to sign your letter, it will be the same pen I will use to remove you,” she had said.

Previous How I survived Covid 19 – wale Oluwaleimu
Next U.S. based Pastor Tola Odutola, wife, others break away from Redeemed