My family began crying – Messi says Barcelona made him 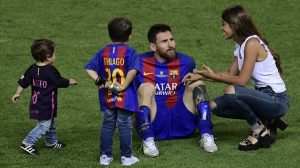 Lionel Messi who has just agreed to stay at Barcelona has expressed emotions after what would be described as a ‘manic two weeks’ regarding his future.

Barcelona fans can now heave a huge sigh of relief after their captain confirms he will continue at the club next season.

The 33-year-old who handed-in his transfer request at the club has been linked with a move away from Camp Nou with Manchester City tipped as possible destination for the forward.

Inter Milan, Manchester United and a few other clubs also showed interest in the Argentine who has now decided to commit another season to the Catalan club.

The Argentine broke silence on Friday, September 4, after Barcelona insist €700million release clause remains in his contract and should he go ahead to sign for another club, he and that team would be dragged to court.

He has agreed to stay at with the Blaugrana at least until the end of his contract which lapses at the end of the 2020/2021 season.

Tony Elumelu, the head of Heirs Holding, and his wife, Dr. Awele are proud parents ...