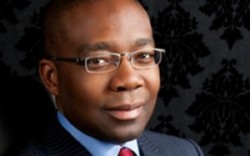 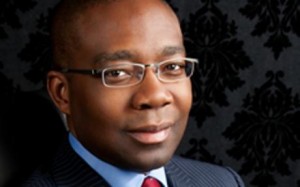 Still leaking his wounds over lost of CBN top job to an “underdog”(Emefiole), Aig-Imokhuede  first Vice President of NSE is excited over Nigeria Stock Exchange, Presidency which is on the way for him as Aliko Dangote step down.

Aig, we learnt is however worried over his past and sentiments that are mounting over his not being capable to sail NSE to greater glory.

Aside his roles in shady deals in the oil sector which financial expert say will not make him enjoy confidence, his closeness with ex-CBN Governor Lamido Sanusi is prompting the Presidency to mark him.

Aig is also believe to be a limelight seeking person, whereas the Presidency of NSE need somebody who is conservative, mature and highly responsible to stablilse stock market, expecially in view of recent negative developments in the market.

Aig-Imokhuede’s strong ties with Access Bank as Investor and Owner also call to question his headship of the NSE “though NSE is privately owned, but Security Exchange Commission Monitors Surveillance in order to protect the market against insiders trading abuses” Financial Expert said.

And added, “That is where Aig will faulter. Let’s wait and see”.

Another negative factor trailing Aigboje is the interrogation by Financial Reporting Council of Nigeria (FRC) alongside Access Bank GMD Herbert Wigwe, in connection with dubious sales of Intercontinental Bank to Access, the indebtedness of Aig, and attendants underhand deals.

Aig invitation of American Music Star Mariah Carey with huge financial implication last year for sent forth party has since put him in public eye as flamboyantly reckless person on the go-go. Indeed Access Bank staffs and stakeholders, including customers believe he does not have the serene calmness, maturity and shoulder for responsibility befitting a leader of high class magnitude.

Previous Are You On Facebook? Open Your FCMB Bank Account From Your Bedroom
Next Soldiers In Borno Lament; Why Boko Haram Kill Us Like Chicken On Daily Basis