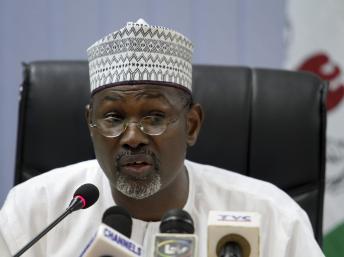 In the next few next few hours Nigerians may get rude shock as election may not hold Feb 14. Here are the signs:

(1)    The calls for the postponement of this month’s general elections may be discussed during Thursday’s(tomorrow) Council of State meeting convened by President Goodluck Jonathan.

One of the key responsibilities of the body is to advise the President in the exercise of his powers with respect to the Independent National Electoral Commission, including the appointments of members of the commission.

(2)     Proponents of the polls’ shift had hinged it on the inability of INEC to distribute enough Permanent Voter Cards to registered voters. The call is widely believed to be engineered by the Presidency, which though had denied the charge.

A source in government said  that information available to the government   showed that contrary to the claims by the Chairman of INEC, Prof. Attahiru Jega, the commission was not yet ready for the elections.

For example, the official claimed that INEC only awarded the contract for the printing of ballot papers for the February 14 presidential election last Monday.

“We learnt he actually summoned a meeting recently with a view to postponing the election but he is scared of the opposition who have been kicking against such.

“This Thursday (tomorrow) meeting will definitely review INEC’s preparations and take a stand.”

(3)     Another Presidency source also informed Us that Jonathan might use the opportunity provided by  the meeting to garner support for the postponement of the polls.

“The Presidency is not resting on its oars concerning the plan to shift the elections. It is already in talks with some members of the council,” he said.

To underscore the importance Jonathan attaches to the meeting, his re-election campaign rally earlier billed to hold on Thursday in Yenagoa, the capital of his home state, Bayelsa, has been put on hold.

It was gathered that the rally might hold later in the day if the meeting ended on time or be  shifted to Friday.

We learnt that some of the   proponents of election postponement might have perfected plan to ensure that Jega did not return as INEC chairman if their plan materialises.

It was gathered that the Presidency and the ruling Peoples Democratic Party were not ready for the elections and believed that their chances could be affected if the elections were held as scheduled.

Because of this,   the Presidency, backed by some hawks in the PDP, are said to be waiting for an auspicious time to ask the INEC chairman to   proceed on terminal leave. His tenure ends on June 9, 2015.

The PDP source said,     “The plan is to discredit the election by forcing postponement. When this is done, sponsored people and groups would start asking for the sack of Jega.

“At this point, the government would then say because of this, he should proceed on terminal leave and then ask the most senior national commissioner to take over and conduct the election.”

Jega’s nomination as INEC chairman followed approval by a meeting of the   Council of State.

Jonathan had said then that he had never known Jega,   a former chairman of the Academic Staff Union of Universities.

Jega’s candidature for the job was said to have been facilitated by a presidency top official, Hassan Tukur, who is from Adamawa State.

(4)     Indication that the 26 registered political parties   are divided over the calls for the postponement of the elections emerged in Abuja with 16 of them and five presidential candidates in support.

They told a news conference on Tuesday that they would boycott the polls if their opinions were not respected.

The political parties premised their argument for the postponement on security, distribution of PVCs and people deserting their places of abode for their villages.

Okoye, who spoke on their behalf, called on the Federal Government to take necessary steps to provide adequate security for Nigerians to go out and collect their PVCs in order to be able to exercise their civic and constitutional duty.

He called on INEC to consider shifting the date of elections to sometime in March or April.

“We are not urging INEC to do anything that is unlawful, illegal or unconstitutional. It is unfortunately becoming clear by the day that most Nigerians appear not to be ready for election but are ready for violence,” he said.

He   also   flayed the   United States Secretary of State, John Kerry, for meeting with only   the presidential   candidates of the APC Maj. Gen. Muhammadu Buhari and Jonathan in Lagos.

But at a different news conference, the presidential candidate of the United Progressive Party,   Chekwas Okorie, condemned the call for the postponement of the elections.

Okorie described the call as a “mischievously contrived clamour.”

He said, “The reasons given by the proponents of the postponement that a great number of Nigerians will be disenfranchised having not been given their Permanent Voter Cards which will enable them to participate in the election is a contrived reason and to a large extent pedestrian.

“As we speak, over 80 per cent of registered voters have received their PVCs according to latest figures released by INEC and this may increase to 90 per cent or above after the close of distribution of PVCs on February 8 2015, as planned by INEC.”

(5)    Jonathan Chief Security Adviser tested the water of Public opinion by calling for postponement 2 weeks ago. It was Jonathan who sent him!

Previous Uduaghan In Grand Preparation For Jonathan’s Campaign In Asaba
Next Be Inspired! Nothing Should Stop You To Succeed… See Limbless Man Raising Family