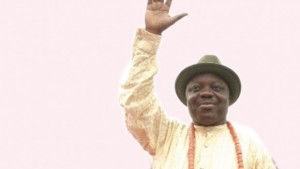 IN a bid to ensure that the Peoples Democratic Party (PDP) gets 100 per cent votes in the forthcoming elections, Governor Emmanuel Uduaghan has charged political leaders to head to their different units and ensure that their people vote for the party in the elections.
Addressing members of the campaign organisation of the PDP in Asaba yesterday (Wednesday), the Governor observed that the shift in date for the elections by the Independent National Electoral Commission (INEC) has provided more room for people to collect their permanent voters’ card (PVC) which would make them eligible to vote.
“As a party that has been on ground since 1998, we have enough man power to win in every election,” the Governor said, adding, “political leaders, coordinators and candidates at the local government, ward and unit levels must work together, continue with our mobilisation campaign at the grassroots to give us victory, nobody should be too big to be part of the ward team.”
The Governor frowned at reports that some candidates of the party were not carrying some members along, asserting that no one should be taken for granted when it comes to elections. He urged the candidates to reach out to everybody not-minding their political leaning or views.
He stated, “some of the candidates have to come down from their high horses, we should not take anything for granted, it should not be a master/servant relationship, it is your duty as a candidate to reach out to aggrieved persons, our candidates should stoop low and meet the people that contested with them in the primaries so that they can get the support of all.”
On PVC, the Governor reiterated that collection of PVC was very important and observed that the shift in date of the elections by the INEC would enable prospective voters collect their PVCs.
“We are still having challenges with our PVC collections, without the card, you cannot vote, the card reader can only take the PVC, it cannot accept the TVC, our people should all collect their PVCs,” he said.
The gubernatorial candidate of the PDP in the state, Senator Ifeanyi Okowa called for a coordinated campaign to enable the party achieve victory at the polls while the chairman of the party in the state, Chief Edwin Uzor urged members of the PDP to work as one united family to achieve victory at the polls.
GOV. UDUAGHAN RE-OPENS GRA MODEL PRIMARY SCHOOL
Delta State Governor, Dr. Emmanuel Uduaghan has directed the re-opening of the Government Reservation Area Model Primary  ‎School to accommodate some pupils from the State-run Women Affairs primary School.
Uduaghan who gave the directive while inspecting construction work at Women Affairs Daycare,Nursery and Primary School in Asaba, said the school was congested with 1,892 puplis in 18 classroom.
He observed that it was not ideal for the children to be overcrowded in classrooms meant to accommodate a specific number of pupils.
According to him, it was not conducive for the health of the pupils and not conducive for learning.
As a result, he ordered that the GRA Model Primary School along Okpanam road that was closed down by the State Government last year, be re-opened to accommodate some of the pupils from Women Affairs School.
His words: ” We are going to open the Model Primary School immediately and move the children to the School because this place is too congested for 1,892 pupils. The GRA School and this place will be one school, so we will open it for them.
Besides, he directed that the Women Affairs School currently under rehabilitation and reconstruction should be painted latest by next week and the block of classroom still under construction be completed.
Earlier the Commissioner For Women Affairs, Mrs. Betty Efekoda who was on ground at the school informed the Governor that the school has 33 teachers and 11 non teaching staff, 6 from Women Affairs Ministry and 5 from State Universal Basic Education Board (SUBEB)
delta state dr emmanuel uduaghan election. 2015 election gov Emmanuel uduaghan PDP politics 2015-02-12
YouNews
Share