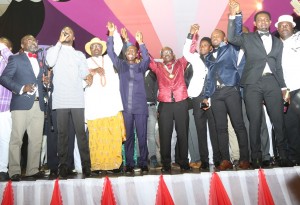 It was a night parked with fun, laughter, pomp and pageantry Wednesday in Asaba as members of the entertainment industry held a “Thank You Concert/Dinner” in honour of the Delta State Governor, Dr. Emmanuel Uduaghan to appreciate his support for the industry.
The Event which brought the crème-de – la –crème in the entertainment industry including veterans like Opa Williams, Oris Wiliki, Ras Kimono, Daddy Showkey, Ali Baba, Sammie Okposio, Emma Ogosi, AY, Gordons. Iyanya, Fred Amata, Zeb Ejiro, Emma Grey, DJ Humility, Mandy, Omoni Oboli, was capped with the presentation of a lifetime Award of Excellence to the governor.
Speaking at the occasion, Dr. Emmanuel Uduaghan disclosed that the human resource development not oil was the greatest resource of the country.
He explained that Delta State has keyed into the development of this resource that was why Deltans can be found in all spheres of human endeavours whether politics, banking, sports, media, or the entertainment industry.
“Our biggest resource is not oil but the human being, in every field in Nigeria, Deltans are there, in banking, media, politics, or entertainment industry”, the governor said.
Governor Uduaghan explained that one of the gains of his administration’s Delta Beyond Oil Initiative was making the state especially Asaba an entertainment hub stating that “ Delta State has the talents, the people and the enabling environment to achieve our dream for the entertainment industry, all we have tried to do is to develop the talents, it is not surprising that most of the artistes especially comedians are from Warri or grew up there”.
He charged Nigerians to always show appreciation for every support received, saying “nothing is as gratifying as showing appreciation for the support one has received, this act of appreciation by the members of the entertainment industry is so gladdening, I never expected something so big as this gathering”.
“I want to let you know that I am also appreciative of the little time we spent together over lunch or breakfast in my house, when I am with you. You make laugh, you entertain me, it helped to reduce the stress of the work”.
While accepting that more need to be done for the growth of the industry in the state, Governor Uduaghan disclosed that the State Government would explore the possibility of holding a carnival and boat regatta in the nearest future.
The State Commissioner for culture and Tourism, Barr. Mofe Damijo in his welcome address said that the idea for the concert was mooted by Ogus Baba to honour Dr Uduaghan who have done a lot to support the industry in the last eight years adding: “We are here to honour a man that has a vision to transform Delta Beyond oil, this is  one of the gains, entertainment now account for over 2.5 percent of the nation GDP”.
Ali Baba, Zeb Ejiro, Opa Williams, I Go Save, Ayo Makun among others in their goodwill messages, commended Dr. Uduaghan for his massive support for the entertainment industry which has taken a lot of our youths off the streets  and improved their talents.
The organiser of the concert, Ogus Baba stated that the concert was a private initiative meant to show deep appreciation to Dr. Uduaghan for his massive contributions to the development of the entertainment industry in the country.
Governor Emmanuel Uduaghan of Delta PDP 2015-03-09
YouNews
Share

Previous UBA Innovates U-Social On Facebook – Why The Product Is Attractive
Next GTBank Declares N116.39Billion Profit Before Tax for FY 2014