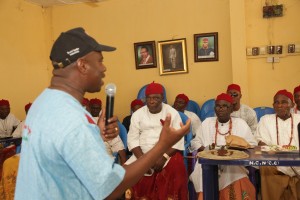 Dr. Dakuku Peterside, governorship candidate of the All Progressives Congress, APC in Rivers State has described good leadership as key to freedom, justice and economic emancipation of any people. The APC candidate who said that progress comes only when competent and visionary people are given opportunity to serve in government warned that except Nigerians vote for capable people, the nation’s march towards building a great nation may be a mirage.

Peterside made the statement during his ward rallies at Ogba/Egbema/Ndoni Local Government Area of the state. He said that Nigeria has come of age, therefore no zone or tribe, for whatever reason, can afford to subsidise incompetence and failure
because other parts of the country are watching. Peterside called on Nigerians to be patriotic and vigilant as they vote because the future and wellbeing of the country depend on the choices they make on 28 March and 11 April.

He described the last seven years as the golden age of development in Rivers State because of the vision and courage of one man.

“Governor Chibuike Rotimi Amaechi has done well. He may not have met all our expectations because no government gives everything but even his critics agree that he changed the face of our state for better. He built fine schools, good health centres, world-class roads and unparalleled investment in human capital. Should we not follow such a man? A man who tells the truth?
“I promise you that I will do more for the people. You all know me and my activities as Commissioner of Works. I am not going to start learning how to improve on infrastructural development because I know your needs.

‘My opponents will begin and end their rallies by criticising Amaechi because they don’t have a work plan. Please go and tell your young men and women that their future is in APC, it is the only party that has plans. The only thing our opponents do is to criticise and abuse, they have no plan for you.

“I will work with you. I will do everything possible to liaise with companies that operate here so that you can have maximum benefit from your God-given wealth. There will be empowerment schemes that will cater to the needs of our people across age and gender. You know our opponents, when they had opportunity, they gave guns and knives to our youths.

“We are happy that President Jonathan himself acknowledged his failure to do a single thing for South-South people, so we must reject him. If he failed to do anything for us in six years, will he now do it infour years? We all know that Port- Harcourt Refinery, Petro-chemical, LNG and more where all built by Northerners. What our people want is development, we don’t care where the person who brings this development comes from. They should stop telling us lies because this federal government has failed. Vote for APC, a vote for APC is a vote for a better future.