Finecoat Ravaged By 20hrs Inferno – The Cause, Losses & Victims 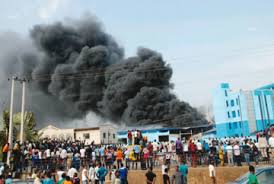 Combine team of almost 10 Vehicles of Fire Fighters could not put off the fire outbreak at Finecoat, Casso, Alagbado, Lagos.

An electrical spark from a Trailer with Kerosine for mixture of Chemicals started it all.

Some workers of Finecoat Paints have said property worth millions of naira was lost to the inferno which gutted the warehouse of the company on Wednesday.

Younews learnt that the fire spread to the production unit, destroying machines and chemicals worth millions of naira.

Younews can confirm that  five persons were injured in the Wednesday fire, which started from a kerosene bank beside the warehouse.

Firefighters and policemen from the Ijaiye Police Division were still on ground as of 1.30pm on Thursday.

A worker, who identified himself only as Jide, said three sections of the company were razed down before firefighters could douse the inferno at about 7am on Thursday.

He said, “It was a huge disaster, but we thank God no life was lost. I cannot specifically state the amount of the losses, but machines, chemicals and three buildings, all worth millions of naira were destroyed. Most of us (workers) were here throughout the night.”

Another worker, who declined to reveal his identity, said it was fortunate that the fire did not get to a machine used for the production of paints. He added that they were still evacuating smeared chemicals.

A relative of Mr. Emmanuel Awode, the company’s CEO, Bose Akinwumi, said victims, who were choked by chemicals had been discharged from the hospital, where they were admitted.

However, when our correspondent visited the hospital at the U-Turn area, three of the victims ─ Tunde Opebiyi, Idowu Folorunsho and Tope Efunbiyi ─ were seen.

Opebiyi, a full-time employee of the firm, said he was trapped in the course of putting out the fire.

He said, “I did not know when I got here. The fume choked me and that was what I remember till I regained consciousness by midnight. The tank was not far from the production point where chemicals are. That was why the fire was much. The doctor said we will soon be discharged.”

A nurse said two other victims, who had burns in the face and around the chest, had been referred to another hospital.

The Director Lagos Fire Service, Rasaq Fadipe, could not be reached for update.