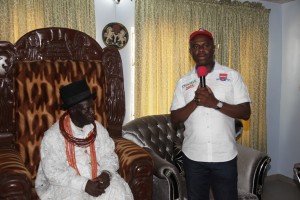 His Royal Highness, Eze Joshua Eyiba, Eze Igbu-Igbuduya of Ekpeye Land has described Dr. Dakuku Peterside, governorship candidate of the All Progressives, APC in Rivers State as the preferred candidate of the people of his kingdom. The royal father also said that the people of Igbuduya and environs are solidly behind the APC because the party has a demonstrable proof of performance.
The monarch made the remark at his palace in Okogbe during a courtesy call by Peterside who was in Ahoada West Local Government Area in continuation of his ward rallies.
Eze Eyiba who described the APC candidate as son of Ekpeye Land by virtue of his long-standing relationships across the kingdom, called on his people to support Peterside and the APC come May 29 and April 11. He charged people of the kingdom to take both the presidential and gubernatorial elections personal. According to him, victory for APC is victory for the entire people of the kingdom, hence the need to reach out.
The royal father who later offered prayers for Peterside had earlier described him as a distinguished legislator and consummate public officer who will take Rivers State to greater heights. He expressed confidence in the APC candidate and pleaded with the people of the state to rally support for him.
In his speech, Peterside pledged to fulfil all his promises. He asked Rivers people to shun liars and their party which is well known for deception and impunity.
“I am a man who stands by his words. I am also a peaceful man and cherish truth. I am proud to say that people who know me can vouch for these qualities even in this season of politics. For me, Rivers State comes first and it is important for all of us to be guided by this desire.  Without any doubt, I know I am that governor who will bring peace and development and I say this with all sense of responsibility.
“APC is running this campaign with a track record of visible achievements. Even Governor Chibuike Rotimi Amaech’s critics agree that he has done a lot for our people. So we are better off with a performing party. Therefore we cannot afford to gamble with our future and the future of our children.
He said Nigeria is in crisis and that only Nigerians can save their country, adding that competent leadership is the starting point to saving Nigeria. Peterside pledged APC’s commitment to the redemption of nation and urged the people to vote massively for the party if they want a new Nigeria that is free of today’s shortfalls.
Dr. Dakuku Peterside 2015-03-18
YouNews
Share