49 Percent Of Women Of Reproductive Age Have Anaemia – NSN 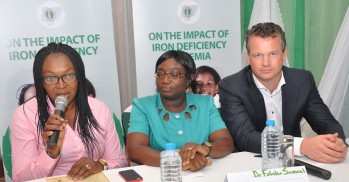 Nigeria faces one of the largest burdens of micro-nutrient deficiencies, with anaemia the most common with a big impact on health of women and children, the Nutrition Society of Nigeria, NSN, have disclosed.

Specifically, 49 per cent of women of reproductive age have anaemia, 24.3 per cent have low iron stores and 12.7 per cent of them are iron deficient.
These figures indicate that majority of the adolescent girls and women did not meet the iron requirements of 20 milligrams per day as recommended by the Food and Agricultural Organisation and, the World Health Organisation.
Iron deficiency anaemia is a condition in which the red blood cells or their oxygen-carrying capacity is insufficient to meet physiological needs of the body. The symptoms of anaemic condition includes, fatigue, dizziness, weakness, drowsiness, shortages of breath and all these militate against active living and human productivity as iron is critical to learning process and energy for day to day activities.
This has raised serious concerns among relevant stakeholders led by the Nutrition Society of Nigeria, NSN, who said that iron is one of the most prevalent micronutrient deficiencies globally, with almost one of every two women of reproductive age being anemic in Nigeria.
Speaking at a press conference in Lagos organised by Unilever Nigeria in partnership with the NSN on the impact of Iron deficiency anaemia in Nigeria, Professor Ngozi Nnam, President, Nutrition Society of Nigeria said that the causes of anaemia vary but that approximately fifty percent of the cases are due to iron deficiency.
Speaking on a survey findings commissioned by Unilever Nigeria focusing on iron deficiency anaemia among women in Nigeria, Doctor Folake Samuel, said that the preliminary research findings show that although many Nigerian women are aware that we have rich iron sources of food in our environment and its benefits as well as the consequences of iron deficiencies, and a lot of them consume iron rich food, but however the consumption of iron rich food is still low and this calls for action and intervention.
As such, a significant proportion of the women frequently experience various symptoms of iron deficiency, Doctor Folake says quoting the report.
The survey sampled 615 women aged 20- 45 years in Lagos to access their level of awareness on iron deficiencies, iron rich food and consequences of iron deficiencies.
“Looking at the awareness level of symptoms of iron deficiency, 55 per cent of the women rated tiredness and fatigue as part of daily life and know that when you suddenly become dizzy out of the blues, it is the consequences of not eating enough iron rich food; pale complexion, being another symptom of anaemia is also common in our society. Some people mistaken a woman being pale as a sign of pregnancy, not knowing that it is an indicator of beinganaemic,” she said.
Professor NgoziNnam added that adolescent girls and pregnant women are the populations requiring the highest amount of iron intake and are, therefore, most susceptible to iron deficiency adding that the typical Nigerian diet is low in iron-rich foods, while cassava and cereals (high in phytates which decreases iron absorption) are commonly eaten staples.

“Pregnant women, teenage girls and women of reproductive age are among the most vulnerable to iron deficiency anaemia because of high iron requirements. Increasing iron intake during adolescence to prepare for pregnancy is crucial to decreasing the risk of iron deficiency anaemia and negative birth outcomes.
“The commonly consumed traditional dishes may not provide sufficient iron to meet the requirements and it may be a challenge to manipulate these recipes as they are passed down from generation to generation. In Nigeria, mothers are the kitchen ‘gatekeepers’ and their adolescent daughters learn cooking behaviors from them,” she said.
MyriamSidibe, Hygiene and Nutrition Social Mission Director, Africa,Unileversaid the aim of the programme was to provide more sensitisation to the general public on the importance of iron nutrients to the health of individuals.
She said that women and children were the group of people more vulnerable to anaemia.

”This issues is common among our women and teenage girls and these people are the bedrock and foundation of the home and family which is the unit of the Nation.
”This are the critical people in the society and their health is important to Nation building, we need to take care of these people,” she said.