10 Things You Didnt Know About The Late Ooni Of Ife 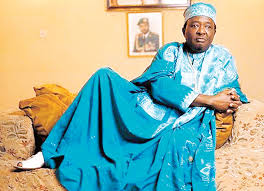 1.     He was born on January  1, 1930 in Ile-Ife to the Ogboru ruling house, grandson of the Ooni Sijuwade Adelekan Olubuse I.

3.     He studied at Abeokuta Grammar School and Oduduwa College in Ile-Ife.

4.     He worked for three years in his father’s business, then for two years with the Nigerian Tribune

5.     He studied business management at Northampton College in the United Kingdom.

6.     He became a manager in Leventis, a Greek-Nigerian conglomerate at the age of 30.

8.     After spotting a business opportunity during a 1964 visit to the then Soviet Union, he formed a company to distribute Soviet-built vehicles and equipment in Nigeria, which became the nucleus of a widespread business empire.

10. In February 2009, Sijuwade helped mediate in a dispute over land ownership between the communities of Ife and Modakeke, resolved in part through the elevation of the Ogunsua of Modakeke as an Oba.