Buhari Will Not Ask Media To “Kill” Any Story – Femi Adesina 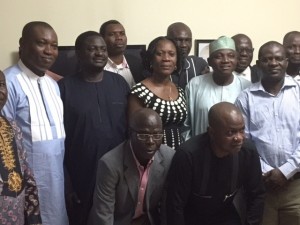 Special Adviser to President Muhammadu Buhari on media and publicity, Femi Adesina has disclosed that the President will have no cause to want any story about his official assignment to be “killed.”Speaking at a dinner with executives and members of the Guild of Corporate Online Publishers (GOCOP) in Abuja on Thursday night, Adesina said that the first thing the President told him when he assumed office was ‘always tell me the truth.’The dinner was put together by the Guild for Adesina who is its Trustee, and the senior special assistant to the President on media and publicity, Mallam Garba, as a way of solidarity for the two Presidential spokesmen.Adesina said that President Buhari had vowed to run an open and transparent government so much that he would have nothing to hide and would have no cause to want to ask for any story to be with-held.He said that the only thing he asked is that for any news item, the Presidency should be allowed opportunity to state its side before being put in the public domain.Adesina commended online publishers for coming together to form a group, even as he advised them to look out for spoilers, gate-crashers and those who might hide under the canopy of online publishing to damage the reputation of innocent public officers.“There is a saying that one bad coin can spoil hundreds of other coins. My advice is that you should not allow any of your members to use the platform to malign innocent people. You should also find a way of sanitizing the social media practitioners who just sit in their bedrooms to churn out news without professional touch.”Also speaking, Garba Shehu thanked members of the Guild for the support they gave him when he handled the media and publicity department of All Progressives Congress (APC) Presidential Council as Director.According to him, APC Presidential campaign was the poorest in terms of resources, “but the richest in terms of people’s goodwill. And the online publishers were the greater part of that process.”Earlier, the President of the Guild, Malachi Agbo assured the two Presidential spokesmen of the support and cooperation of the members, even as he appealed to them to always make themselves available for any news item that requires clarification.He assured them that members of the Guild, who are veterans in journalism profession, would continue to support them with prayer to achieve success in their assignment.