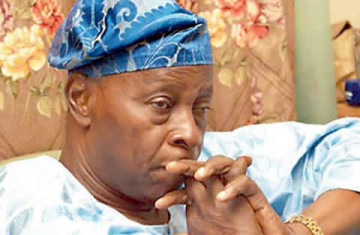 CHIEF Olu Falae’s farm in Akure has again been attacked by Fulani herdsmen, barely two weeks after the herdsmen kidnapped the former Secretary to the Government of the Federation and kept him for four days.

The herdsmen reportedly moved in their cattle into the farm situated at Ilado on the outskirts of the state capital at about 2am on Monday and destroyed a one-kilometre stretch of maize plantation.

Manager of the farm, Mr Bruno Akhigbodemen, who conducted journalists round the farmland on Wednesday, said the herdsmen ran away before help could come after the workers they met in the farm had raised the alarm.

Akhigbodemen said, “The destruction visited on the farm is devastating. They invaded the farm and made their cows to eat and destroy our maize that covers over one kilometre.

“They came around 2am; one of the workers raised the alarm but before help could come they had destroyed the farm and fled. We quickly informed Baba (Falae) who immediately reported to the police.”

The farm manager said some detectives were thereafter drafted to the farm.

But the spokesman for the state police command, Mr. Femi Joseph, told one of our correspondents on Wednesday that he had not been briefed on the incident.

Our correspondent who visited Falae’s house on Wednesday was told the ex-SGF and National Chairman of the Social Democratic Party was resting and not available to talk.

His Personal Assistant, Capt Moshood Raji, who also confirmed the attack, said, “Baba can’t be reached on telephone now because we just returned from the farm now and he is taking his rest.”

Raji also said that the elder statesman had reported the case to the State Commissioner of Police, Mr. Mike Ogbodu, and that “he (CP) had directed the State CID to move in.’’

‘‘We searched the people who were there yesterday but we could not arrest anybody. But the villagers told us that they saw them moving out of the farm on Monday morning. They said they were moving towards Owo area,” he added.

Curiously, the CP denied knowledge of the attack when contacted by one of our correspondents on Wednesday.

“I am not aware that any herdsmen attacked Chief Falae’s farm again, I’am not aware,” he said.

Falae, also a one-time finance minister, was kidnapped from his farm by suspected Fulani herdsmen on his 77th birthday on September 21 and was not set free until four days later.

He said he was tortured by his abductors and that ransom was paid before they set him free.

He also said his abductors threatened to kidnap him again if he started saying “rubbish” after his release.

“On Wednesday one of them came and said, ‘look we are going to leave here on Thursday morning. Since we cannot leave you here alone, if we don’t get what we want, we are going to kill you.

“And they said they gave me until 3pm, and if at 3pm they don’t get the money, they would execute me. I thank God that at 21 minutes to 3pm, one of them came and said, ‘the money don complete.’

We’ll not fold our arms –Afenifere

The latest attack has attracted the anger of the pan-Yoruba group, Aferenife, which said further attacks would not be tolerated.

The Ondo State government also condemned the attack, which it described as “despicable.”

Afenifere leader, Chief Ayo Adebanjo, said if nothing was done, the Fulani herdsmen could become too powerful and start oppressing the Yoruba just as they were doing to other ethnic groups in Benue, Plateau and Nasarawa states.

He said, “It is unfortunate that up till now, neither President Muhammadu Buhari nor the Federal Government has made a statement on the issue. We cannot sit down and continue to fold our arms. We cannot continue to allow these Fulani herdsmen to destroy our crops, kill our people and rape our women in the name of one Nigeria.

“Do they expect us to fold our arms and let this continue? This is what they have been doing all over the country. This never happened during the First Republic or the Second Republic.”

Adebanjo said the issue was one of the issues discussed at the National Conference. He, therefore, blamed the government for failing to find a solution to the crisis.

“Can’t the government confine them to grazing fields? Must we be compelled to continue to accommodate visitors that continue to kill and attack their hosts? We cannot continue to live together at the expense of our lives and property.”

The spokesperson for the Afenifere, Mr Yinka Odumakin, said all Yoruba leaders under the aegis of the Oodua Foundation, would meet in Ibadan on Thursday (today) to take a stand on the matter.

He said the Yoruba had become tired of the frequent attacks and could no longer condone the situation.

He said, “All Yoruba groups will converge on Ibadan to discuss this matter. We have had enough. The Fulani have declared war on us by returning to Chief Falae’s farm. There will be an appropriate response from the meeting. We have had enough and Nigerians must address this issue once and for all.”

Another Afenifere leader, Senator Femi Okurounmu, told one of our correspondents that he was aware of the fresh attack on Falae’s farm.

He said he could not understand why the Fulani would continue to attack peace-loving Yoruba. He, however, said he would not comment until after the Ibadan summit.

The founder of the Oodua People’s Congress, Dr. Fredrick Fasehun, said he was not aware of the latest attack on Falae’s farm.

He, however, said the Fulani herdsmen would regret their actions if they continue to take the Yoruba for granted.

“I am not aware of this latest encroachment but I think Yoruba leaders should not take this assault lying low. If the Fulani want war, they will get war,” he said.

The Ondo State Commissioner for Information, Mr Kayode Akinmade, condemned the act, saying it was despicable and unacceptable.

He said, “It is despicable and unacceptable, we condemned it in its entirety and we believe that the security agencies will take action appropriately to nip further attacks in the bud.

“The first time they attacked Chief Falae’s farm they kidnapped the elder statesman and again they are now coming back to destroy the farm. They want to desecrate our land, this is unacceptable.’’

He then enjoined the security agencies to take a drastic step to ensure the safety of the lives and properties of the people of the state.