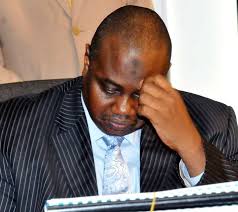 Lamorde, has been the EFCC chair since 2011. Magu is remembered as a no-nonsense investigator of the commission at its inception.

He was removed along with several other key officials by Farida Waziri when she became chairman in 2008.

We recalled that the former chairman of the Economic and Financial Crimes Commission (EFCC) Mr. Ibrahim Lamorde was summoned to appear before the Senate tomorrow over an alleged diversion of recovered stolen funds amounting to N1trillion.
It was gathered that the Senate Committee on Ethics, Privileges and Public Petitions which is probing the EFCC boss had formally written an invitation letter, requesting him to appear tomorrow, Tuesday.
The Senate had in August commenced the probe of the EFCC boss following a petition written by one Mr. George Uboh alleging that Lamorde diverted the sum being stolen money recovered from a former Governor of Bayelsa State, Diepreye Alamieyeseigha and former Inspector-General of Police, Tafa Balogun.
The EFCC boss, according to Uboh diverted the funds when he was the agency’s Director of Operations between 2003 and 2007, and when he was acting Chairman of the commission in 2008.
Sources at the committee said the EFCC boss is likely to appear before committee.
“You know he was supposed to appear last time but his representatives pleaded that he should be given three weeks and this has since elapsed, so we are expecting him now,” he said.
When contacted, the Chairman of the Senate Ethics, Privileges and Public petitions committee, Samuel Anyanwu exclusively confirmed to our reporter, saying “We have sent an invitation to him, we invited him for Tuesday”.
It would be recalled that the probe of Lamorde created a sharp division at the Upper chamber in August with the PDP caucus chaired by Godswill Akpabio and the Unity Forum faulting the probe, saying the petition was not laid on the floor.
Our correspondent reports that the petition, according to Anyanwu has been laid on the floor.