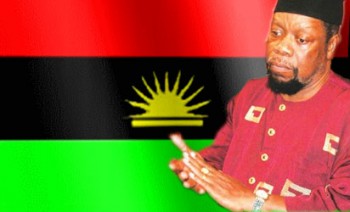 The All Progressives Congress in the South-East on Sunday faulted the ongoing agitation for the actualisation of Biafra, warning that the development could scuttle the chances of the Igbo to produce the country’s President in 2023.

Spokesman for the South-East APC Leadership Caucus, Mr. Osita Okechukwu, said this in a statement which was made available to our correspondent in Enugu, on Sunday.

Renewed agitation for Biafra, which was partly triggered by the detention of the leader of the Indigenous Peoples of Biafra, and director of Radio Biafra, Nnamdi Kanu, had led to massive protests in major towns of the South-East and South-South.

The protesters, consisting of members of IPOB and the Movement for the Actualisation of the Sovereign State of Biafra, are demanding the recognition of Biafra as a sovereign country and Kanu’s immediate release.

There are reports that state governors and other major stakeholders will meet in Enugu on Tuesday to deliberate on the matter.

The South-East APC, however, urged the agitators to “stop beating their war drum” in the interest of the Igbo.

Okechukwu, in the statement, expressed confidence that President Muhammadu Buhari would, in the spirit of zoning, hand over power to the South at the end of his second term in 2023.

He noted that an Igbo was best positioned to emerge as President when the office rotated to the South in 2023, saying the pro-Biafra agitation should not be allowed to scuttle the opportunity.

He added, “Going by the zoning convention, equity and natural justice, surely the Presidency will rotate to the South in 2023.

“And when the Presidency rotates to the South in 2023, we (Igbos) have all the cards stacked in our favour to appeal to our brothers in the South-West, who have occupied the office for eight years, and our South-South brothers, who had five years plus in the Presidency.

“Every rational indicator favours the Ndigbo and so, we need to drop our hate propaganda and wait patiently to harvest the turn of the South-East.

“To be frank, this is the golden opportunity for us to join the mainstream, and it should not be scuttled by pro-Biafra agitators.

“Therefore, instead of agitating for Biafra, the Ndigbo should think out of the box and support Buhari to actualise this noble objective.”

Okechukwu equally noted that societal challenges, believed to be among the factors currently fuelling the pro-Biafra agitation, were not peculiar to the South-East.

The spokesman stated, “Whereas, we agree that there is gross unemployment, discontent and despondency among the youths in the land, however, it is not peculiar to the South-East alone.

“The gross unemployment is nationwide and would be addressed holistically; luckily, our son, the distinguished Senator Chris Ngige, is the minister in charge of employment.

“We appeal to the pro-Biafra agitators to stop their mass action and drums of war in the overall interest of the Ndigbo at home, across the country and abroad; as our record shows that it is better to jaw-jaw than to war-war — dialogue is the best solution.”

Meanwhile, pro-Biafra agitators on Sunday lashed out at fiery Enugu catholic priest and founder of the Adoration Ministries, Rev. Fr. Ejike Mbaka, for describing the ongoing protests as a waste of time.

Mbaka had, in a sermon in Enugu on Saturday, condemned the ongoing agitation and protests for the actualisation of Biafra.

The priest, who also described the agitation as ‘evil’, chided the protesters, mostly youths, for abandoning their business and disrupting economic activities.

“Locking up your shops and disrupting economic activities will not add any naira to your pocket. Whatever grievance you have could be resolved through dialogue,” the clergyman had said.

In a reaction to Mbaka’s comments, a faction of MASSOB, which had joined the IPOB in the protests, said the agitators were ready to sacrifice more than their shops and business.

The National Director of Information of the MASSOB faction, Uchenna Madu, in a statement, in Enugu, said the youths were ready to lay down their lives for the sake of ‘freedom’.

“Biafra agitators are more determined to sacrifice our shops, business, jobs, comfort and even pay the supreme price for the sake of our freedom,” Madu said.

He wondered why the cleric spoke out against the protests a few days after he was allegedly visited by the wife of the President, Mrs. Aisha Buhari, who was in Enugu State recently to inaugurate a health screening scheme.

Previous Fashola Rated As “Super Minister” In Buhari’s Govt …. May Vie For Presidency In Future
Next Diezani Commences Painful Radiotherapy For Cancer Treatment …. + Her Revealing Interview