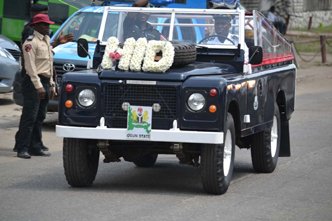 She died on September 19, and the rights which started with lying-in-state at her Park Lane residence in Apapa, yesterday, is expected to climax with the interment scheduled for November 25 when she would have been 100 years old.

Governor Akinwunmi Ambode, yesterday, joined scores of residents at the lying-in-state of late HID Awolowo at the family’s residence in Park Lane, Apapa

Speaking  shortly after the rites, Ambode said Mama Awolowo’s demise was a great loss to Lagos as she was a major force in the development of trade and commerce in the state.

He said: “For the fact that the final burial rites of Mama is commencing in Lagos State signifies that this is a loss to the whole of Lagosians and the mere fact that we are remembering Mama from Park Lane also shows that she’s been a major bastion of commerce and trade in the whole development of Lagos State.

“For us, this is a major loss to Lagos, it’s not even about the Yoruba race alone. So, coming here is just to show that together we would remember Mama for every good thing that she’s been. She’s been very humble, very generous and like Papa always said, she was indeed a jewel of inestimable value.”

Meantime, Governor Abiola Ajimobi of Oyo State has called on the citizens of the state to be part of history by turning out in large numbers to witness the activities scheduled for the final burial rites of Chief HID Awolowo, in Ibadan, today.

A statement from the office of the Secretary to the State Government quoted the governor as saying that the matriarch of the dynasty of the late Premier of Western Region, Chief Obafemi Awolowo, deserved a burial befitting a heroine.

As a mark of respect, the governor has ordered a temporary closure of the popular Agbeni market today due to its contiguous location to the Methodist Church, Agbeni, where a commendation service would be held for the deceased by 9 am.

The statement said the closure became necessary to prevent avoidable gridlock and the attendant pains it could cause traders and commuters plying the area.

Jakande, Osoba, Adebanjo, others eulogise her

Other dignitaries, who attended the lying-in-state and service of songs were Mrs. Abba Folawiyo; former Surveyor-General of Lagos State, Mr. Joseph Agbenla; leader of the Pan-Yoruba social group, Afenifere; Chief Ayo Adebanjo among others.

They all took  turn to eulogise the late H.I.D Awolowo.

I hope her death will unite Yoruba nation—Osoba

Osoba told Vanguard after the service of songs that the late H.I.D was one of the greatest women God blessed the nation with and called for the unity of the Yoruba nation.

His words: “She was one of the greatest women of this nation. One thing I will never forget about her was her food. Her food was always delicious. Any time we have dinner with Mama and Papa Awolowo, we used to lick our tongues all night.

On the Yoruba nation, the former governor said: “We are going through a dangerous and trying time in Yorubaland. I pray that if only for the memory of Mama, we should all bury our differences and come together.”

Alhaji Lateef Jakande, first civilian governor of Lagos State, who attended the service of songs for the late matriarch, recalled her managerial skills as the chairman of Nigerian Tribune newspapers.

According to him, “she was a great woman. We have very few women of her calibre. Her integrity and industriousness would be missed. She was the moving spirit in the Nigerian Tribune. I will say that HID Awolowo lives forever.”

We have missed one of the stars of her generation —Adebanjo

Afenifere chieftain, Chief Ayo Adebanjo, described the late H.I.D as: “The mother of the nation. She was one of the blessings God gave to Nigeria. All the achievements of the late Chief Obafemi Awolowo couldn’t have been possible without her contribution. In fact, her late husband acknowledged it.

“She was very loyal and an enterprising woman who shares the view of her husband. She stood by her husband all through. When late Chief Awolowo was in prison, she stood firmly by him. She was a role model. We have missed one of the stars of her generation. I pray that God will bless Nigeria with another HID.”

She was a jewel of an estimable value—Grandson

Also describing her grandmother, Olusegun Awolowo said: “She was a jewel of an estimable value and that is what she remained to all of us. Mama lived through Nigeria’s history. When she married late Obafemi Awolowo, my grandfather, she married everything about him.”