Former President Goodluck Jonathan has denied claims that he awarded a $2bn arms procurement contract, contrary to reports of a presidential investigations committee into arms procurement under his administration.

The committee had said that the Jonathan administration claimed to spend $2.2bn to procure arms that were never bought. It also accused the former National Security Adviser, Sambo Dasuki, of supervising the contract. 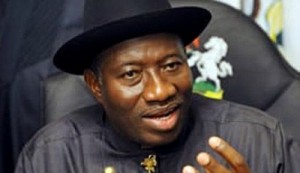 Dasuki had said in response to his current indictment over the alleged embezzlement of funds meant for multi-billion naira arms deals for Nigeria’s anti-terrorism war that allegations against him were simply unfounded and that all arms contract were approved by Jonathan, who was his boss.

He said the allegations from the presidency were “nothing short of propaganda.”

“There were no fictitious contracts; contract sums were not diverted and the relevant services acknowledged delivery of equipment. There was no contract awarded or equipment bought without approval from the then President and Commander-In-Chief. I am not a thief or treasury looter as being portrayed,” Dasuki said in the statement released on Wednesday.

Jonathan, who was a guest at a forum co-hosted by the National Democratic Institute and the Centre for Strategic and International Studies on Thursday in Washington, the United States, said he never awarded any $2bn contract.

In the discussion moderated by a Senior Advisor to President Barack Obama and member of the NDI Board of Directors, Ambassador Johnnie Carson, Jonathan said there was simply nowhere such money could have come from.

“Sometimes, I feel sad when people mention these figures. The figures are staggering and untrue. Another governor said someone stole a million barrels of oil per day.”

This is the first time the former President will be speaking publicly on the issue.

Previous Dangote Is Fortunate, Not Held Hostage In Mali
Next CBN Saves $300million From Bureau-de-Change Demand For BVN