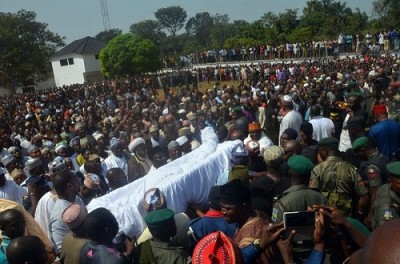 The late former governor of Kogi state, Abubakar Audu, was buried today Monday, November 23, 2015 amid tears and wailing in Ogbochia.

This was before rumours went viral that the governorship candidate of the All Progressives Congress (APC) had been raised by a prophet who stormed the venue from Lagos with a promise of returning life to the lifeless body of the politician.

The rumoured resurrection of Audu turned heads and resulted in wide jubilation on the streets of Lokoja, the state capital, as well as other parts of the state.

The hopes of the late former governor’s supporters were dashed when his body was brought out of the house and interred at exactly 1.15pm before the massive crowd of people wailing and wishing their former leader was still alive.