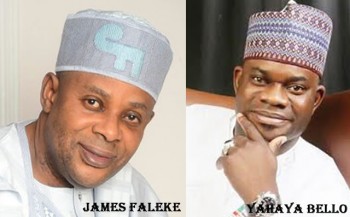 There were indications on Sunday that moves by the All Progressives Congress to resolve the crisis created by the death of its governorship candidate in Kogi State, Prince Audu Abubakar, had failed.

We gathered that following its decision on Friday to pick Mr. Yahaya Bello as a replacement for the late governorship candidate, the APC had contacted leaders in the three senatorial districts of the state to rally support for Bello.

It was learnt that the party was using its leaders in Kogi West to reach out to Mr. James Faleke, the running mate of the deceased governorship candidate. Faleke hails from Kogi West.

It was gathered that the APC had also contacted its leaders in Kogi East as part of efforts to resolve the logjam created by its choice of Bello.

Faleke had on Thursday written the Independent National Election Commission and the APC, asking to be declared the state’s governor-elect.

A member of the party’s National Working Committee, said, “I can confirm to you that we are trying to resolve the crisis created by our decision on Bello. We are trying to reach out to Faleke and the Audu’s camp. Honestly, we have not succeeded. Faleke is not ready to withdraw his demand and many people are insisting on Audu’s son, Mohammed.”

He said the party had planned to resolve the crisis before Monday when the decision on Bello would be announced.

According to him, the leaders are hopeful that the crisis would be resolved before Tuesday.

On Tuesday, it wrote the APC, asking the party, which was leading in the November 21 poll, to submit a replacement for Audu, who died on Sunday shortly after the result was declared inconclusive.

It had said it would hold a supplementary election in 91 wards of the state on Saturday.

The APC had initially said it would hold a primary to choose Audu’s replacement, but a newspaper had on Saturday reported that the party had picked Bello, who was the first runner-up in the primary that produced Audu.

The Deputy National Publicity Secretary of the APC, Timi Frank, said the party would meet in Abuja on Monday and take a decision on the issue.

He told one of our correspondents on the telephone, “We are meeting tomorrow (Monday); the party’s decision will be made public after the meeting.”

Frank had on Saturday told one of our correspondents that the party was still consulting on the issue.

But another member of the APC’s NWC, who pleaded anonymity, said the party had mandated Bello to reach out to his opponents.

He explained that the party leadership had in consultation with its team of lawyers decided that allowing Bello to take the ticket was the safest way to go in the circumstances.

The source said, “We have impressed it upon the candidate to reach out to Audu’s family, Faleke and their supporters to douse any tension.

“He was encouraged to reach out to elders across the state to assist him to broker peace. The party was left with little choice because time is no longer on our side. It is practically impossible for us to hold a fresh primary within the time left for us.

“You will also recall that the Chief Law officer of Nigeria, in his submission last week, also alluded to the fact that the result of the primary, which produced Audu, still subsists.’’

It was also learnt that party leaders would begin a meeting on Sunday and end it on Monday.

The party is expected to make its final decision public after the meeting.

But when contacted, Faleke said the party had not reached out to him, adding that he was not prepared to negotiate his demand that INEC should declare him the governor-elect of the state.

He stated that he would continue to oppose the scheduled December 5 supplementary election and the decision of the APC in the state to pick Bello as the replacement for Audu.

Faleke, who spoke exclusively with Us on Sunday, debunked claims that the party had reached out to him and had appealed to him to accept Bello.

Describing the claims as “false, not true”, Faleke added that he had written the National Chairman of the party, Chief John Odigie-Oyegun, a second letter to protest the nomination of Bello.

He said, “All these talks about the APC reaching out to me are unfounded. Nothing like that has happened. They have not approached me. It is false and not true.

“In any case, what purpose will that serve? I have made my position very clear in the letters I wrote to INEC and the national chairman of the party.

“I have written a second one, and I am saying that the nomination of Bello is wrong; we won’t accept it. We stand by the position as stated in those letters.

“And for the benefit of doubt, I am on this project with (Mohammed Audu)) the son of my late boss. We are working together in opposing this nomination of Bello.”

Responding to a specific question on whether INEC had replied his letter in which he asked to be declared as the governor-elect, Faleke told Us that he had yet to hear from the electoral umpire.

“They have not replied me. Nothing has been heard from them.

“But, what is important is that I have given my position on this issue and nothing will change it”, he added.

Meanwhile, Faleke has described as illegal his nomination as the running mate to Alhaji Yahaya Bello, who was substituted for the late Audu.

Faleke, in a letter to the National Chairman of the APC, dated November 27, 2015, also described Bello as a disloyal party member, whom he accused of working for the opposition Peoples Democratic Party during the November 21 governorship election.

He described the arrangement to substitute Audu with Bello as unjust, adding that he was never consulted before his name was submitted to the Independent Electoral Commission as Bello’s running mate for the Saturday’s supplementary election.

His letter to Odigie-Oyegun read in part, “I wish to put it on record that I was neither consulted nor informed by anybody before my name was submitted as running mate to a man who has, since the conduct of the primary, abandoned the party, took the party to court, worked for the PDP, thereby causing our party to lose his polling unit – 88 votes to his ally party, the PDP’s 116, repeating the same feat at the ward level with APC scoring 1,146 to PDP’s 2,058.

“While it is true that the said Alhaji Yahaya Bello participated in our party’s primary, it is trite that party primaries are conducted to produce a candidate, and once a candidate is produced, the congress, being an ad hoc tool of the party for that purpose, should automatically extinguish.

“It is clear from this injustice, that our party is on the path of rewarding disloyalty and discouraging loyalty through this act of impunity for which we all fought the PDP.”

Mohammed, who is the eldest son of the late Audu, said he was not aware of that anyone had been picked as a replacement for his late father.

Flanked by the running mate to his father, Faleke, he labeled such move (to pick Bello as a replacement for the late Audu) as backyard move.

Mohammed, who declined to speak further on the issue because the occasion was the 8th day fidau for his father at Oghonicha in Ofu Local Government Area, however, promised to speak on the issue at a later date.

He said, “Our mission here is to pray for the repose of his soul. It is too soon to be discussing politics. I will like us to focus more on the mourning.

“As you can see, people are still wearing long faces.”