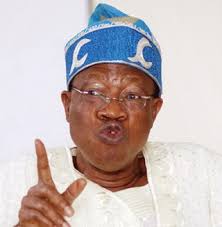 Governor Ayodele Fayose of Ekiti State has challenged the Minister of Information and Culture, Alhaji Lai Mohammed to make public names of the 15 former governors and 55 Nigerians that he claimed stole N1.34 trillion between 2006 and 2013.

Recall that Lai Mohammed had disclosed that former governors, ministers, businessmen, public servants and bankers stole approximately N1.34 trillion between 2006 and 2013 in the country.

The governor, who also described as disgraceful, bringing the Peoples Democratic Party (PDP) National Publicity Secretary, Olisa Metuh to court in handcuff, argued that “even the masterminds of Madala and Nyanya bomb blasts, Kabiru Sokoto and Aminu Sadiq Ogwuche were not handcuffed when they were arraigned in court.”

In a statement by his Special Assistant on Public Communications and New Media, Lere Olayinka, Governor Fayose said it was funny that close to one year after it won the presidential election, the President Muhammadu Buhari-led Federal Government was still operating as if it was campaigning for votes.

The governor argued that “they are turning governance to Nollywood, such that when one movie is about to end, they release another one. As it appears that the $2.1 billion arms deal movie is getting to an end, Lai Mohammed introduced another movie titled; N1.34 trillion loot.

“Unfortunately for them this time around, Nigerians have become tired of watching the Federal Government movies, they now want reality. Nigerians are now aware of the scam in the $2.1 billion arms deal movie, having seen that the amount those already charged to court were charged with is not more than N10 billion and $2.1 billion is over N600 billion.

“Therefore, Lai Mohammed must either tell Nigerians details of the 15 former governors and 55 people that he claimed stole N1.34 trillion, where the stolen money is kept and bring back the money or apologise to Nigerians for lying.”

While describing the persistent claim by the Federal Government that the Peoples Democratic Party (PDP) destroyed Nigeria for 16 years as hypocritical, Governor Fayose said Nigerians must begin to ask which party majority of those presently ruling the country under the APC government were between 1999 and 2014.

“Majority of those who ran the Federal Government between 1999 and 2003 under the PDP are in the APC government today. President, vice president, ministers, governors, senators and House of Reps members who were part of the PDP government are now in APC. Yet, APC keeps telling Nigerians that PDP ruined the country. This hypocrisy must stop,” he said.

The governor, who insisted that due process of the law must be followed in fighting corruption, noted that disobedience to court orders itself is a criminal offence that is more grievous than corruption.

He said no amount of harassment and intimidation will silence opposition in the country, saying President Buhari and his men should rather get used to the reality that opposition must exist in a democracy.